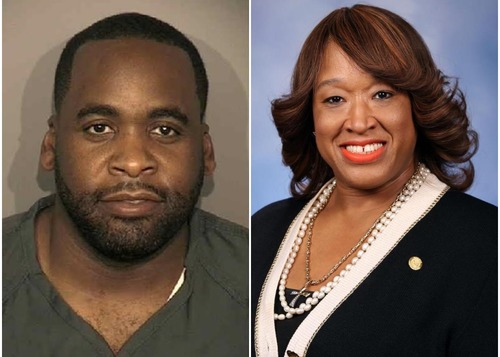 Donald Trump seemed "very receptive" to a request to have Kwame Kilpatrick's lengthy prison term commuted, says a Detroit lawmaker who last week urged the president to release the ex-mayor.

During a White House visit for African-American leaders, state House Rep. Sherry Gay-Dagnogo (D-Detroit) handed Trump a letter she hoped would bolster a commutation request submitted by Kilpatrick last year. It made the case that Kilpatrick's 28-year prison term for corruption is excessive and unfair.

"Based on his body language, I could tell that he was present, paying attention, receptive and somewhat reassuring," Gay-Dagnogo said of her brief interaction with Trump. "He seemed familiar with the request and I believe he said he'd look into it."

The letter says that though "Kilpatrick made great errors in judgment," convictions of other public officials with "similar cases, sentenced around the same time, highlight stark contrast." It names former Illinois Gov. Rod Blagojevich, former Virgina Gov. Bob McDonnell, and former Louisiana Congressman William Jefferson, who were all sentenced to 14 or fewer years in prison and have since had their sentences overturned in court or commuted by the president.

The letter is signed by Gay-Dagnogo and five other members of the Detroit delegation in the Michigan House of Representatives: Reps. LaTanya Garrett, Marshall Bullock, Wendall Byrd, Tenisha Yancey and Karen Whitsett.

The Black History Month event marked Trump's latest appeal to the African-American community as he seeks re-election. In his remarks, he touted progress he says his administration has made on criminal justice reform.

Gay-Dagnogo says she's optimistic Trump will release Kilpatrick. Others have also recommended his release, including Compuware co-founder Pete Karmanos, who is an investor in Deadline Detroit.

"African-American community leaders and pastors are weighing in as well," she said. "Perhaps he sees it as a political opportunity, or he sees what is fair. ... [Given] the ones he already let out, what would be the difference in this case?"