Dan Rohn, who has coached state champs, joins the Warren parochial school "to replace another championship coach who was fired over a hazing scandal that triggered charges against seven players and abruptly ended the team's season last fall," the Free Press reports.

Rohn, the former assistant head coach at Ferris State University, made a name for himself as the bulldog leader who drove Grand Rapids West Catholic High School to four state titles, including the 2014 crown. ...

Rohn is the 19th head football coach at  De La Salle, replacing Mike Giannone, who in four years led the Pilots to two state championships (2017, 2018)  but lost his job amid hazing allegations that surfaced last fall. 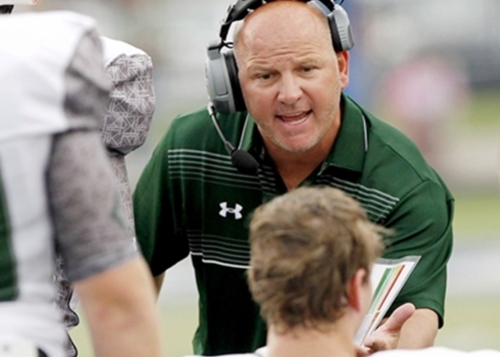 Dan Rohn has a critical off-field mission as well as an athletic one. (Photo: WDIV)

The newcomer's challenges include establishing and enforcing a culture of respect and dignity with zero tolerance for mistreatment of teammates or schoolmates. Job responsibilities include "helping them grow as both football players and young men."The school's motto is "Builders of Boys. Makers of Men."

De La Salle believes Rohn will help students live up to that motto, saying he brings with him "a passion for connecting with student-athletes and helping them grow as both football players and young men."

Dozens of players have told investigators about locker room hazing of new teammates, the reporter adds.

They described it as "broomsticking," where players would hold another fully clothed player down while someone prodded them in the legs and buttocks area with a broomstick. There was no penetration.

Rohn, 48, grew up in Muskegon and was a running back at Grand Valley State University. He worked at Ferris from August 2016 until recently.