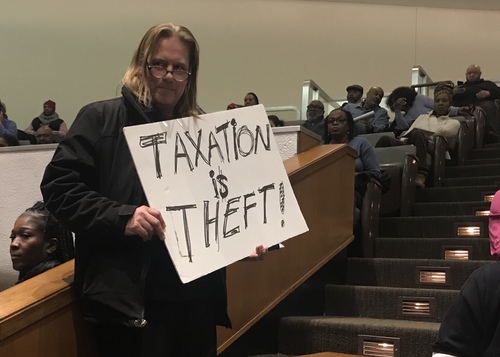 Dozens of Detroiters who said they'd been overtaxed by thousands of dollars between 2010-16 demanded reimbursement or credit toward future tax bills. The spirited session was attended by hundreds and punctuated by calls for Mayor Mike Duggan to "Cut the check."

The city says repayment is not legally or financially possible, and is instead considering giving affected residents free or discounted Detroit Land Bank homes, home rehab loans, and priority in city programs that offer education and job training opportunities.

Residents who owned homes in the city between 2010 and 2013 would automatically be eligible. Those who believe they were overtaxed between 2014 and 2016 would need to prove it, the Duggan administration said, because it believes that, the issue was by then largely resolved through a three-year citywide reassessment completed in 2017.

Officials provided the following explanation for why reimbursement and credits aren't possible, according to the Detroit News:

Duggan has said Detroit can't repay homeowners because current law doesn't allow it and the city can't afford it. A city legal opinion released Tuesday concludes it's not legal for the city to set up a reimbursement fund because residents have "no legal claim against the city" because the appeals process has passed.

The offerings fall far short of a number of remedies proposed by the Detroit People's Slate, an activist group that encouraged residents to attend Tuesday's meeting. The group seeks compensation and changes, including:

The People's Slate has urged council to adopt the following resolution: