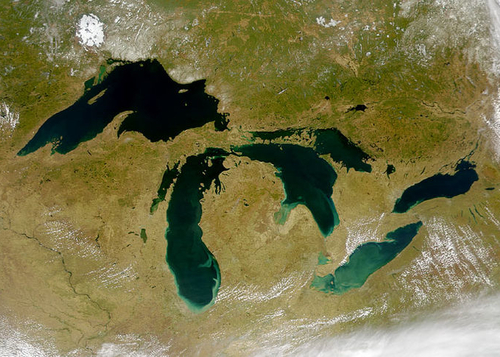 The Army Corps of Engineers released its monthly report and said we've exceeded the previous record, set in 1986:

The latest U.S. Army Corps of Engineers Detroit District monthly report showed Lakes Superior as well as Michigan and Huron, which are counted as one body of water, surpassed their February record-high mean levels previously set in 1986.

No relief is in sight, as forecasters expect the lakes to remain high well into 2020 and perhaps longer.

This is when the lakes begin their seasonal rise, as snowmelt and spring rains trickle into the basins. Water generally peaks in June or July, then gradually fall  again. Recently, though, the historic high water has been causing property damage:

The high water has been wreaking havoc across the Great Lakes, which are bursting at the seams less than a decade after bottoming out. The sharp turnabout is fueled by the region’s wettest period in more than a century that scientists say is likely connected to the warming climate.