Is FCA's Detroit wall like the Berlin Wall? Freep readers don't think so

Headlines are slippery things, we know painfully well. They can appeal, repel or bore.

The former is always the goal, naturally. Yet grabbing for drama, using a vivid phrase, dangling a catchy hook sometimes is a stretch too far.

That's the reaction of some Free Press readers to the words atop an in-depth project: "Detroit's hulking sound barrier prompts Berlin Wall comparisons."

The multimedia report by Eric D. Lawrence and two photojournalists is a comprehensive, balanced look at "a massive wall on the east side of Detroit" on one side of the new Fiat Chrysler plant. "The company and city tout its benefits," a subhead says, "but some residents are shocked by its size and presence."

Both sides are well-represented in the FCA beat reporter's nearly 2,800-word overview Friday, accompanied by five photos and a 55-second video. But the unsupported Berlin Wall reference undercuts that evenhandedness, says critics.

"As someone that served in Berlin while a substantial portion of the wall was still standing. I can definitively say other than by the loosest standards (i.e., it's a wall) there is no comparison," Chris McPeake of South Lyon posts at the paper's Facebook page. 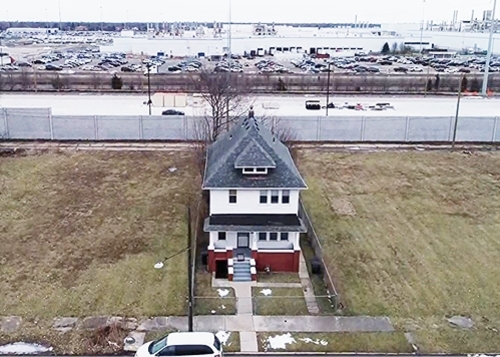 The provocative phrase appears only in the head and third paragraph:

Some say the wall beats the view of industry from a backyard; others doubt its stated purpose and scale, comparing it to the Berlin Wall or the U.S.-Mexico border wall.

Two people in the area, a resident and a convenience store owner, mention the president's anti-immigration wall in conversations with Lawrence. No one who's quoted compares it to the infamous barrier dividing East and West Berlin from 1961-89, which included guard towers, military patrols and an anti-vehicle trench between fences dubbed the "death strip."

The wall in Berlin, a concrete symbol of tensions between the United States and the former Soviet Union, ran 96 miles after a 1962 extension and rose to 13 feet. The one alongside the expanded Jefferson North Assembly Plant  is two feet taller in portions and is just a mile and a half long in two sections.

The $5.07-million wall, a project of the Detroit Brownfield Redevelopment Authority on land owned by FCA, seems to zig and zag, fronting Beniteau Street across from Southeastern High School or slipping behind an alley as if creating a maze. The wall stretches in two sections from Kercheval Avenue on the east end to Warren Avenue on the west, with the only opening between at Mack Avenue.

Reactions from neighbors range from acceptance to anger. Viewing a giant auto plant so close to their homes is not ideal, even with its promise of jobs in a hard-hit area, but many question the value of a wall billed as a sound barrier that they believe does not offer protection from plant emissions.

Yet only Lawrence and his headline-writer evoke the concrete monstrosity that split Berlin during the Cold War and gave Ronald Reagan a line for the ages during a 1987 speech in West Berlin.

The Freep's comparison across continents and decades, with no visible foundation, creates an opening for online snipers.

"What, no barbed wire? No checkpoints? No armed guards? Yep, looks nothing like the Berlin Wall," Kerry Rucks of Commerce Township posts under another reporter's Facebook link to his paper's elaborate presentation, apparently coming in Sunday's print edition.

More than 100 comments are posted in under a day at the Freep's Facebook page. A sampling:

Over at Reddit's lively Detroit forum, where sniping seems to be a medal event at times, these are among reactions:

Ouch on that last one, we acknowledge.

Southeastern High School on Fairview Street is partially visible at the far left.