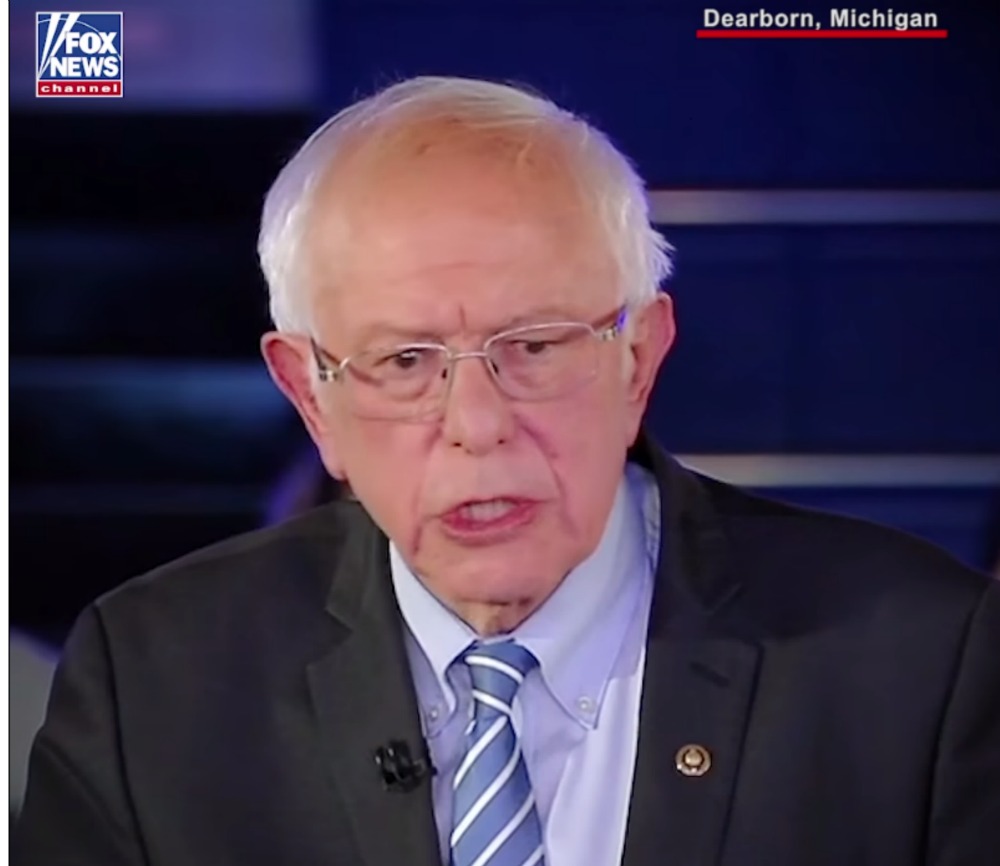 Bernie Sanders at the Dearborn forum.

Under Monday’s full moon, a little March Madness shone on the basketball court at the Field House on the campus of the University of Michigan-Dearborn.

The winner of the “Big Tuesday” series of primaries will probably go on to face President Donald Trump in the November election. Of all six states, Michigan is the biggest prize – and, perhaps, the most pivotal -- with 125 delegates. Most polls favor Biden.

But you wouldn’t have sensed that in this gym, which was transformed into an immense television studio for this one-hour “town hall” telecast. Sanders – facing anchors Bret Baier and Martha MacCallum – was surrounded on four sides by supporters, many of them young, many wearing maize-and-blue “M” colors and quite a few in hijabs.

They chanted his name, booed hostile questions from the anchors and answered in call-and-response fashion when Sanders asked if they thought he was too radical by proposing a $15-per-hour minimum wage, tuition-free public colleges and guaranteed health care.

One odd moment added to the surrealistic, “reality-television” flavor of the age of Trump, whose biggest success in life prior to the presidency was as a TV star on a “reality show.”

With Fox set to go live with Sanders at 6:30 p.m., the White House announced around 6 p.m. that a Trump news conference with his corona virus task force would be delayed until 6:30.

That forced a decision at Fox headquarters in New York. Might the network dump or delay its “town hall” in favor of Fox’s favorite public official?

No way, said a Fox spokesperson. “Easy call,” she said. “We’ve got our town hall and we’re sticking with it.”

When asked why, she pointed out that Sanders did a town hall last year with Fox that scored high in ratings.

All this seemed to indicate that Fox ratings were the priority, even if the chief executive of the United States, on the day of a stock-market panic, was speaking live from the White House about a medical crisis.

Sure enough, when the forum began, Fox put just a little box in the lower, right corner of the TV screen showing Trump soundlessly speaking at the White House lectern. Printed words advised that Trump could be seen live on Fox Business, a companion channel.

Did Trump Reach TV in Time?

Trump’s remarks were shown live on MSNBC and CNN, two networks he often denounces as “fake news” while praising Fox. Then it got stranger.

At 6:44 p.m., Trump finished his brief statements and surprisingly stalked out of the White House briefing room while reporters shouted a question: Has he been checked for the virus? Trump refused to answer. A flustered Vice-President Mike Pence admitted he didn’t know if Trump had been tested.

Less than 15 seconds after Trump left his virus squad members to fend for themselves in the press conference, Sanders faced Fox's camera in Dearborn and said: “Donald, you’re probably watching. How are you?”

Turning to Baier and MacCallum, Sanders said: “He’s kind of addicted to your station.”

Baier countered with “He’s actually having a news conference,” perhaps not having yet noticed on his stage monitor Trump’s abrupt departure just seconds before.

In that Trump has been known to take scientific, security and political advice directly from Fox News Channel, it is possible that Trump walked out of the news conference and immediately went to a TV screen tuned to Fox to hear, in that very first moment, Sanders greeting him from Dearborn.

While the anchors remained seated on tall chairs, Sanders stayed mostly on his feet, moving around, gesturing with his hands near the faces of the anchors and drawing cheers for voicing support for a Palestinian state along with “dignity and justice” for the Palestinian people.

MacCallum seemed a little unnerved when the audience booed her defense of union workers who, she said, like their “employer” health insurance just the way it is.

And when MacCallum spoke up for all those generous billionaires who are donating so much money to help in a health crisis, Sanders snapped back:

“Don’t you think it’s a bit absurd that -- in the wealthiest country in the history of the world -- we have to depend upon the generosity of billionaires to help us?”

When it was over, many in the studio audience lingered to take photos and chat. Among them was Hassan Ibrahim, 19, of Dearborn, a sophomore majoring in cyber security at UM-D.

He said he was surprised that Sanders-hostile Fox would stage its show in a Sanders-friendly place like Dearborn.

“It is a pretty heavy Bernie city, especially at a university,” he said. ”They knew Bernie Sanders would have clapping and applauding.”

In that Ibrahim said he’d already voted by mail, he was asked who he supported.

And Biden is expected to win. But in past cycles, in Michigan, victory has gone to candidates like George Wallace in 1972, Jesse Jackson in 1988 and, in 2016, Trump and Sanders.

A good turnout is expected. The full moon will still be in effect Tuesday; the nation will watch Michigan and things here might yet get a little loony.