Video: Joe Biden snaps at Detroit critic of his stance on guns: 'You're full of shit'

Joe Biden clearly relished a chance to talk tough, on camera, when challenged Tuesday morning by a construction worker during a Jefferson North Assembly Plant visit on Detroit's east side. 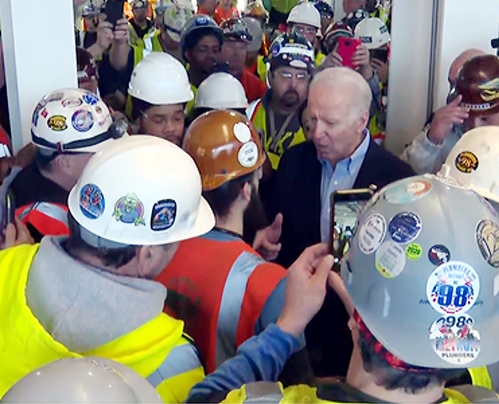 The former vice president was touring an assembly plant under construction for Fiat Chrysler, shaking hands with and praising the electrical workers union members who are building the plant. As Biden was working the room, one man confronted him about his stance on gun ownership.

"You are actively trying to end our Second Amendment right and take away our guns," the worker told Biden.

Biden replied: "You're full of shit."

"I support the Second Amendment. The Second Amendment — just like right now, if you yelled 'fire,' that's not free speech," Biden continued. "And from the very beginning — I have a shotgun, I have a 20-gauge, a 12-gauge. My sons hunt. Guess what? You're not allowed to own any weapon. I'm not taking your gun away at all."

Biden shushed an aide or union escort who tried to end the exchange.

When the bearded accused said he heard the remark in "a viral video," Biden replied: "It's a viral video like the other ones they're putting out that are simply a lie." He later told the questioner: "Don't be such a horse's ass" and asked: "Do you need 100 rounds?"

A brief video of the encounter swiftly gained traction on social media:

Kind of amazing that anybody thinks this video makes Biden look anything other than terrific. He shushes the aide who wants to lead him away - and then engages a hostile critic face to face, fact to fact. Impressive. https://t.co/yINIKi4Ffi

David Frum, an author and senior editor at The Atlantic, was a speechwriter and special assistant to President George W. Bush in 2001-03. In 2007-08 he was senior adviser to Rudy Giuliani's presidential campaign.

Gov. Whitmer, on MSNBC, responds to viral video of Biden’s heated exchange with a Detroit autoworker: “He’s able to stand there and have a conversation with someone on a worksite and have a real, real discussion about (gun safety) and where we’re headed”