Biden's 'full of shit' accusation rattles Nolan Finley, who calls it 'not presidential'

If you wonder how the both-sides-ing of the presidential race, now virtually certain to be Joe Biden v. Donald Trump, will play out in the mainstream media, look no further than Nolan Finley's column on Biden's victory in the Michigan primary. 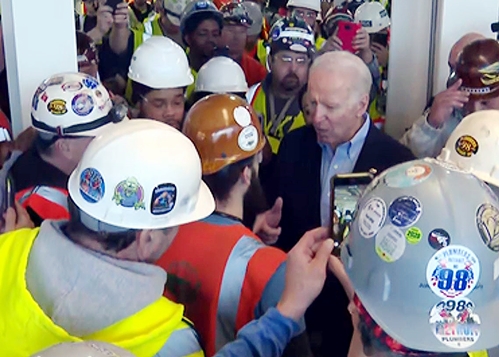 You know who else is full of it?
(Photo: CBS News)

Biden "isn't presidential," wrote Finley, who owns the slim honor of being one conservative who was Never Trump enough to lead his editorial board to an endorsement of Libertarian candidate Gary Johnson in 2016. And how does he know this? Because Biden spoke sharply to a construction worker in Detroit who accused him of wanting to take away Americans' 2nd amendment rights.

“You’re full of shit, I support the Second Amendment. The Second Amendment — just like right now, if you yelled ‘fire,’ that’s not free speech. From the beginning I have a shotgun. I have a 20-gauge, a 12-gauge. My sons hunt. Guess what? You’re not allowed to own any weapon. I’m not taking your gun away at all.”

Biden was cranky, confused and incoherent. “You’re not allowed to own any weapon”? Wonder how denying an established right will play with moderate voters who are also gun owners?

Others watched the same interaction and came away with a very different impression -- of a man unwilling to be cowed by an unfair accusation. If you listen to the encounter, it's clear Biden was emphasizing the "any" in that statement, which is true.

Americans can't own just any weapon, and if Finley doubts it, maybe he can try to buy a grenade launcher or full-automatic machine gun. If there were incomplete sentences in there, that's usually how face-to-face speech goes.

And anyway -- hello, elephant, did you just come into this room? -- has Nolan Finley listened to any given word salad burped up by the president of the United States? Cranky, confused and incoherent describes Donald Trump on any day of the week. Finley acknowledges Trump is no better, but decides:

Voters looking for maturity and stability in their president may decide that Biden is as deficient in those qualities as is Trump.