Lunch at Zingerman's on a whim? Don't want to fight for parking in Ann Arbor? You're in luck. 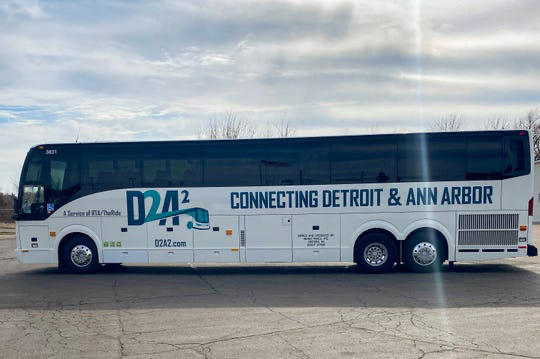 Starting Monday, buses will run hourly from Grand Circus Park to Ann Arbor's Blake Transit Center, in an expansion of regional transit that "riders have been requesting for some time."

The service, known as D2A2, is to run from 5:45 a.m. until 11 p.m. Mondays through Fridays with limited service on Saturdays and Sundays, according to information provided by the Regional Transit Authority of Southeast Michigan.

One-way base fares are $8, but advanced booking online will knock that down to $6. There’s also a $5 per-fare deal for a 10-ticket purchase. Seniors and disabled riders get a $4 fare, according to the news release.

The Grand Circus stop, on southbound Park Avenue between West Adams Avenue and Bagley Street, is to be marked with a D2A2 sign, but it could eventually get a shelter.

The University of Michigan has been running its Detroit Connector service for some years now, and Greyhound also runs between the two cities daily. But hourly service on weekdays offers an option for people who commute for work, as well.