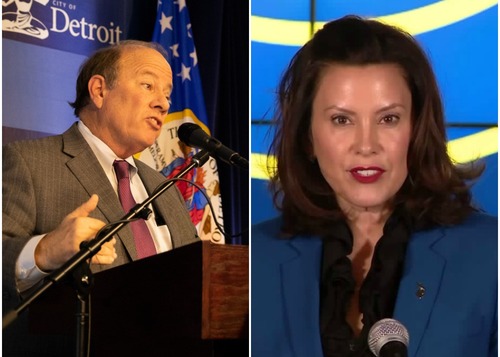 Officials urged the cancelation of gatherings of more than 100 people. (Photos: Michael Lucido and State of Michigan)

Updates: The ripple effect of COVID-19 washes out Detroit Symphony Orchestra performances, at least through Sunday, and group events at the Detroit Institute of Arts until April 13.

Both organizations act Thursday in response to Gov. Gretchen Whitmer's suggestion to cancel events with more than 100 people.

"The DIA remains open to visitors," it posts, "serving as a place for inspiration, calm and respite in challenging times."

The DSO emailed patrons that performances of "Carmina Burana" will not go on as planned Thursday through Sunday. "We believe we must follow the recommendations of public health officials," says president and chief executive Anne Parsons.

The NHL, MLB and NBA have suspended their seasons. The NCAA has suspended all winter and spring championships, inlcuding the Division I men and women's basketball tournaments that were supposed to start next week.

As of Wednesday, 27 test results for the virus were pending and 150 people were being actively monitored. Updates are available on the state health department's website.

A state of emergency was declared in Michigan Tuesday as health officials announced the first two cases shortly after polls closed in the primary election.

Here's the latest as of early Thursday:

Still just two known cases: An infected Wayne County resident had recently traveled domestically and an Oakland County resident abroad. It's still not known what cities they are from, but Duggan on Wednesday ruled out Detroit. One is in stable condition at the University of Michigan Health System. Officials said the Oakland resident, a middle-aged woman, had contact with "a handful" of people who've all been self-isolated and are not showing symptoms. She returned from a trip from Italy.

Dr. Russell Faust, medical director for Oakland County, said as of Thursday about 85 people in the county had been tested, and so far, only the hospitalized woman was found to have the virus. He said testing has been limited, so it should be assumed there are more existing cases in the county.

"We need to behave like there’s not just one case," he said.

Wayne was on Wednesday still working to determine how many people its patient came in contact with. Preliminarily, the The Detroit News reported officials believed at least one person — a Michigan State University student — was at risk of contracting the virus following contact with the infected individual. They were reportedly tested, with results pending. The county is monitoring 11 people for coronavirus as of Wednesday.

How many could be sick? State officials said nearly 500 people in the state had been referred for monitoring as of Tuesday, with fewer than 100 under "active" monitoring by the Michigan Department of Health and Human Services for possible exposure. By then, 57 Michiganders had tested negative for the virus and 18 tests were pending.

Canceled events: Whitmer urged the cancelation of events of more than 100 people. A March 27 get-out-the-vote rally with Michele Obama and Sunday's St. Patricks Day Parade in Corktown are among casualties, though bars along the parade route still plan parties. Whitmer and the head of the state's health department also urged avoiding “non-essential travel" and asked that people leave work or school if they begin to feel sick. All residents, they said, should avoid spreading germs, as many could be asymptomatic and the virus is deadly for people with compromised immune systems.

Canceled classes: Most Michigan universities suspended in-person instruction through the end of their semesters, in late April. Dearborn's Whitmore-Bolles Elementary is closed following a staffer's contact with someone who tested positive for coronavirus. Rochester Community Schools are shut today and Friday "so we can provide training to staff if it becomes necessary to engage students in remote learning outside of the classroom." West Bloomfield School District classes are cancelled Friday so teachers and administrators "can adequately prepare for the unkown surrounding COVID-19," the district posts. "Staff members will ... work on the distruct's remote learning instruction plan in the event we have to close schools for a prolonged period."

Pistons self-quarantine: The NBA has suspended its season after a starting Utah Jazz player tested positive for the virus. Center Rudy Gobert played against the Pistons for 35 minutes on Saturday at Little Caesars Arena. The team has been told to self-quarantine. The average incubation period for the virus is five days.

Water service restored in Detroit: To ensure Detroiters can do hand-washing and other hygiene, the Duggan administration has launched a program to restore water service to households that enroll in a new $25-a-month plan. The mayor said Wednesday that 139 households are in the process of having their water turned back on and that 261 have enrolled.

Zen Center shuts: The Detroit Zen Center and its nonprofit business, Living Zen Organics, suspended operations Wednesday "to do our part in protecting and preventing community outbreak in our vulnerable [Hamtramck] neighborhood and center." Events are cancelled through mid-April, Eater Detroit posts.