Schools are closed, bars and restaurants shut down, and many temporarily laid off or working from home. Disruptions to daily life are growing more severe in Michigan, where 54 cases of coronavirus were confirmed late Monday. And if other parts of the country and globe should serve as an indication, a weeks-long lockdown curtailing travel outside the home could be next.

As Michiganders face a new reality, the question many are asking is “how long will it last?”

Gov. Gretchen Whitmer has closed schools through April 5 and activity centers — including gyms and libraries — through March 30, but a local infectious disease specialist says it could be months before life returns to normal in Michigan.

“If we take all the strategies (from around the world) and do everything perfectly right away, I would still look at at least five to six weeks” before cases start to drop off, said Dr. Teena Chopra, a hospital epidemiologist and associate professor at Wayne State University. “It will unfold on a state-to-state basis in the U.S. It will all depend on every state governor — how they take the reins and their political socio-economic variability.”

Whitmer has incrementally tightened restrictions on activity since the state reported its first coronavirus cases last Tuesday. On Monday, she dropped the maximum capacity for gatherings from 250 people to 50. The same day, President Trump and the Centers for Disease Control and Prevention recommended it be lowered to 10.

Strategies Chopra says should be implemented immediately include a lockdown that limits travel outside the home to only essential activities like grocery shopping and medical visits. Social distancing is designed to “flatten the curve” and slow the spread of the virus to allow hospitals to keep up with demand. Michigan has limited tests to screen for COVID-19, the disease caused by coronavirus, and Chopra estimates the true number of infected residents is likely in the hundreds. 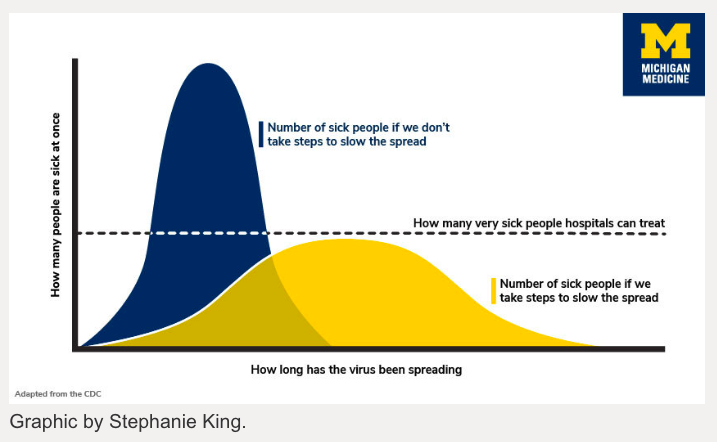 Once past the peak of the outbreak, Chopra says healthy people will be safe to return to school and work while continuing to do their best to follow certain rules — distancing themselves from others by at least six feet and washing hands often. At that point, if hospitals aren’t overwhelmed, the state should have more testing kits and better idea of who’s infected, she says.

Normal socializing — like shaking a stranger’s hand and sitting next to one at a bar — should wait until cases fall back down to zero, which could take until summer.

A worst-case scenario, she said, would be one akin to Italy’s, which saw its first 100 cases about 10 days before the U.S. There, cases escalated quickly, overwhelming hospitals. On Feb. 23, Italy had 76 cases. Now, a little more than three weeks later and almost a week into a nationwide lockdown, the number of cases is approaching 30,000 and still growing exponentially. More than 2,000 people have died.

Meanwhile, cases have receded in China’s Hubei province, the initial epicenter of the virus, where the global outbreak began in late December. The province imposed a lockdown approximately three weeks later, on Jan. 23. Cases in the country did not begin to recede until mid-February, and travel restrictions in low-risk cities in Hubei were lifted only last week.

Chopra’s assessment of what’s in store for Michigan dovetails with recent comments from President Trump, who said in a Monday news conference that the outbreak may not end in the U.S. until July or August at the earliest. He added that he may advocate for quarantine or curfew in local “hot spots.” The San Francisco Bay Area on Monday announced a near-lockdown to last through April 7.

Once things are under control, Chopra warns there will likely be a second wave of the virus as people resume social activity. That could be less severe and limited to local clusters, however, as the country will presumably be better prepared. A vaccine will still take up to 18 months to produce, she said.