A visit Wednesday afternoon to the live video feed from a nesting box on the Detroit Zoo's water tower shows that four falcon eggs now are being incubated -- up from one last weekend.

Chicks should emerge shortly after mid-April.

These days, we all can use uplifting news such as this rewarding sign from an avian family in Royal Oak that's unaffected by the pestilence plaguing human neighbors.

Enough about the disease already -- let's see a sign of spring, or promise, of uplift.

The Detroit Zoo has that covered. Its landmark water tower alongside Woodward Avenue in Royal Oak "is once again home to a pair of peregrine falcons," the attraction posts. And a video camera monitors the one-egg nest and livestreams scenes intermittently. (It's offline during dark hours, plus other times.) 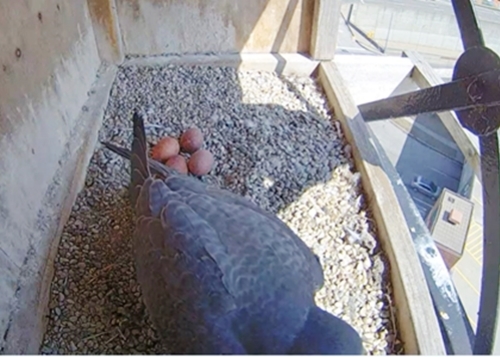 These eggs take about 30 days to hatch.

Six hours of archived footage here shows the mother atop her brown egg as traffic flows below on Woodward Avenue and on access lanes to I-696 at 10 Mile Road. The zoo posts:

The male peregrine falcon on the water tower, identified as Justice, hatched in 2012 at the Jackson County Tower Building. He originally paired with an unbanded female, and they hatched eight chicks.

Last year, Justice took up with a new female, named KJ, who was hatched at the Racine County Courthouse in Wisconsin in 2016.

Thank you to the Michigan DNR for helping us with the nest box design, and also to Metro Wireless and Spiritech for helping with the network and camera setup.

Peregrine falcons, the fastest birds, are raptors that eat rodents, pigeons and other birds and can zip around at 220 mph. In  the wild, they're cliff-nesters. Locally, they find perches atop skyscrapers and other buildings, including Old Main at Wayne State since 2016.