Pedestrian bridge collapses in Detroit at I-94 at Van Dyke 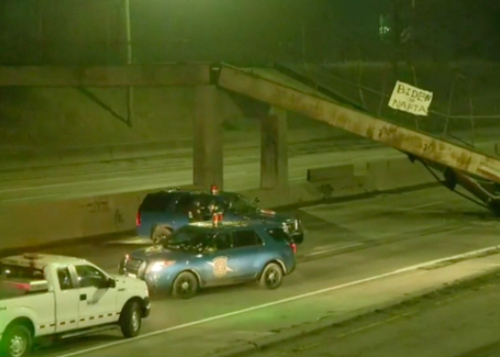 Because there's no commuting situation that can't be made worse by a truck driver who doesn't know how tall his vehicle is, a pedestrian bridge over I-94 collapsed early this morning, closing the westbound lanes near the Van Dyke exit.

WDIV reports drivers are being routed off the westbound lanes of the freeway at Gratiot and being allowed back on at East Grand Boulevard. The bridge was a pedestrian walkway at Townsend Street. No one was injured.

A sign on the bridge indicated Joe Biden's support for the controversial North American Free Trade Agreement in 1994.

Metaphor? We're too busy to ponder.