It's almost as though Jason Hargrove had an eerie premonition two weeks ago.

That's when the Detroit Department of Transportation driver went live on Facebook after his shift to complain about a coughing rider who didn't cover her mouth. On Wednesday night, the 50-year-old died of Covid-19, according to Mayor Mike Duggan and the drivers' union.

It's unknown whether there's a link between that late March incident and his lung infection. 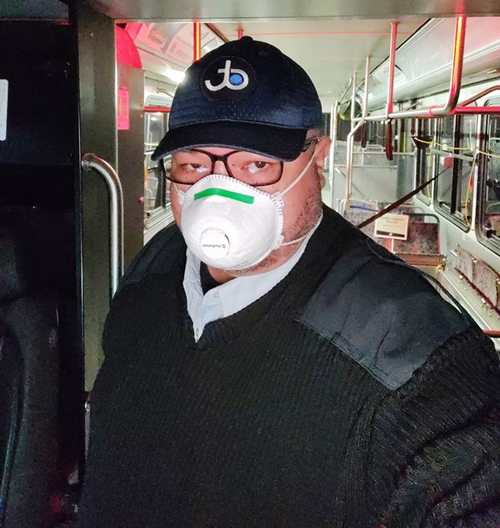 Jason Hargrove posted this Facebook photo of himself March 20.

Here's part of what he says in his eight-minute video, embedded below:

"It’s at some point in time where you got to draw the line and say enough is enough. I feel violated; I feel violated for the folks that were on the bus when this happened.

"There was about eight or nine people on the bus that stood there as she coughed and never covered up her mouth.

In a Thursday news conference, Duggan commended Hargrove for his service to the city.

"He knew the risks, was vocal about the risks, and he went to work anyway," said Duggan.

At least eight DDOT workers have tested positive for COVID-19 and that 133 others are currently quarantined. That's one-quarter of the city's 530 drivers.

Drivers union president Glenn Tolbert tells WXYZ that some members are talking about a work stoppage over health safety fears.

The drivers held a one-day work stoppage March 17, prompting city officials to  implement safety measures limiting contact between drivers and passengers. Fares have been suspended and front entrances on buses have since been closed.

Duggan said Thursday that he wished the city had taken that precaution weeks earlier, claiming Hargrove was infected before the rules went into place. The coughing incident, however, occured four days later, according to Hargrove's video.