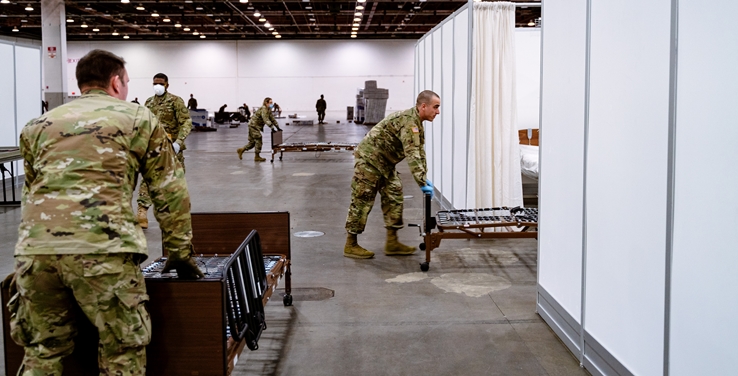 Another 1,493 pandemic patients are diagnosed since Saturday, just a dozen more than were newly confirmed as positive a day earlier.

Detroit adds 537 cases in the past day, according to the Department of Health and Human Services in Lansing. That brings the city's caseload to nearly 4,500 and its death toll to 158.

Another 8,061 new diagnoses are from other parts of the three-county area.

Metro area deaths from the lung virus rise to 539, including Detroit. The region, including the city, account for 87% of COVID deaths since Michigan counting began March 18.

The statewide day-to-day rise in new cases is 10.5% -- the third straight daily drop in the rate of increase (which was 18% on Friday and 11.6% Saturday). That could be a three-day blip, or possibly the start of an encouraging turn if it continues.

Cautious optimism about a U.S. turnaround, perhaps by next weekend, is voiced Sunday by Dr. Anthony Fauci, head of the National Institute of Allergy and Infectious Diseases.

"We should hope that within a week, maybe a little bit more, we’ll start to see a flattening out of the curve and coming down," he said on CBS News' “Face the Nation. Until then, he warned, "this is going to be a bad week. ... We're going to continue to see an escalation."

Not everyone counted is in critical shape or even hospitalized. Michigan's tally since the third week of March doesn’t reflect recovered and discharged patients. 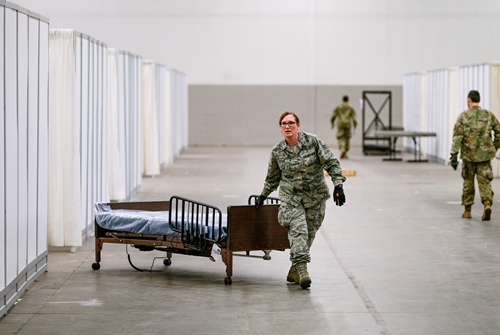 Another view of preparations downtown at a 1,000-bed military field hospital.

Sunday’s overall tally includes 12,556 patients from Detroit and its surrounding three counties (nearly 80% of the total).

That gender gap in lung infections and deaths is seen elsewhere, The Washington Post says this weekend:

Coronavirus data reported by more than a dozen states and the nation’s largest city [show] that slightly more women are getting infected than men. But of more than 3,600 deaths in 13 states and New York City that report fatalities by gender, the majority of victims are men.

The disproportionate toll of the virus appears to have deep biological roots.

Emerging research has revealed that women’s bodies are better at fighting off infection, thanks to the hormones in their systems and the genes on their two X chromosomes.