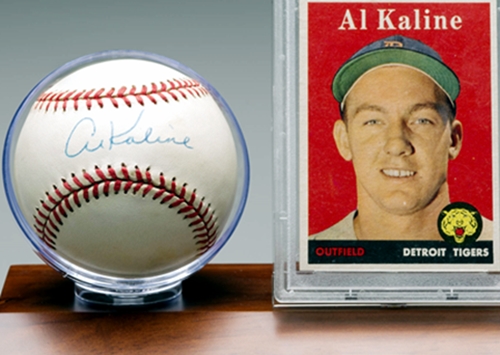 Al Kaline, whose rifle arm from right field and his solid batting earned him a spot in the hearts of generations of Tigers fans, died Monday afternoon in Bloomfield Hills, the Detroit Free Press reports. He was 85.

The cause of death was not immediately disclosed. The death is confirmed by John Morad, a close family friend.

Kaline played 22 seasons with the Tigers and hit more homers -- 399 -- than anyone in the team's history.

"Baseball lost a titan today. Anyone who knew Al Kaline would describe his gentle soul and passion for baseball as an unbelievably powerful combination, making him one of the most respected players in Major League Baseball history," Tigers chairman Christopher Ilitch said in a statement on Monday. "My mother, father and I cherished the special relationship we had with Al Kaline, who was a trusted advisor and dear friend for many years.

"His dedication to Detroit was unparalleled and he was affectionately known as 'Mr. Tiger.' His positive contributions to the sport will forever be realized by baseball fans everywhere. The impact of his life is wide-reaching, and he will be greatly missed by millions in Detroit, the state of Michigan and across the baseball community."

A native of Baltimore, Kaline who earned the nickname "Mr. Tiger," was inducted in the Baseball Hall of Fame in 1980.

After his baseball career, he remained active with the Tigers organization, first working as a color commentator on TV from 1975-2002 with George Kell. While he was never the most exciting commentator, he shared with viewers his knowledge of the game and players.

He went on to assist in the front office and mentor outfielders during spring training.

In 1954, he married his high school sweetheart, Madge Louise Hamilton. The couple had two sons, Mark and Michael.