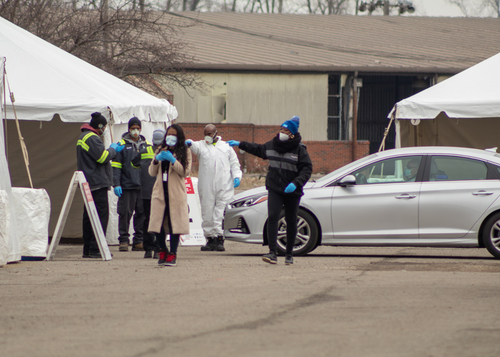 A Covid-19 test that's been used to quickly detect the disease in Detroit's first responders and other essential workers is only 90-percent accurate, according to Mayor Mike Duggan.

Duggan, who brought the 15-minute Abbot ID NOW test to Detroit shortly after it received FDA approval, provided that rate at a news conference last week, saying the tests, in the way Detroit uses them, are "certified as good as any test in the country.”

But a new study by the Cleveland Clinic suggests that accuracy rate falls short of other commonly used tests.

Dr. Gary Procop, who heads COVID-19 testing at the Cleveland Clinic ... says a test should be at least 95% reliable.

The Cleveland Clinic plans to rely on ... tests that performed better in the study, Procop said. That includes the test developed by the Centers for Disease Control and Prevention, which detected 100% of positive samples. Another test, made by Roche, detected 96.5% of positive samples. The fifth test in the study, made by Cepheid, detected 98.2% of infected samples, Procop said. The Cepheid test produces results in less than an hour.

The study tested 239 specimens using five commonly used tests. It has not yet been peer-reviewed.

Procop found the test by Abbot Laboratories to be only 85-percent accurate when results were processed a certain way, but Duggan says Detroit uses a different protocol to ensure greater accuracy.

It's unclear if there was a study that determined the test is otherwise 90-percent accurate. Duggan shared that rate saying, "I’m on the phone every day with national labs and national doctors and I’m totally up on every test and its accuracy."

Detroit has relied heavily on the Abbot tests since becoming the first city to obtain them early this month. Most recently, they've been deployed to the city's coronavirus-ravaged nursing homes.

CVS Health in Dearborn is also using the tests under a new partnership with Gov. Gretchen Whitmer.