Time to catch up with the redemption saga of Cass Tech grad Jayru Campbell, a quarterback with a healthy perspective on a month that brings joy and disappointment. 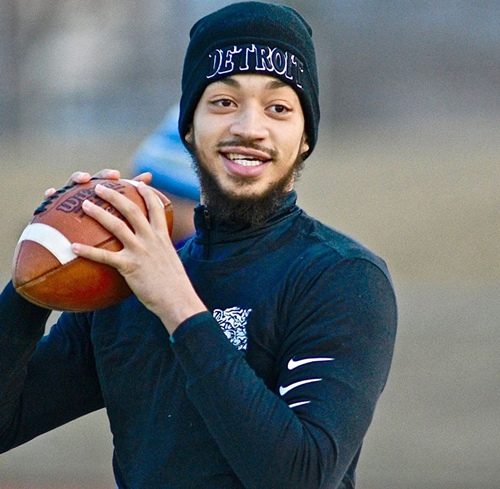 Jayru Campbell: "I'm blessed to even wake up and still live." (Photo: Facebook)

At The Detroit News, David Goricki tells what's going on with the 23-year-old:

Jayru Campbell didn’t hear his name called during the three-day NFL draft. He didn’t get a free-agent offer either, which means his football career might be over.

Campbell did get a lifetime gift on Saturday with the birth of his daughter, Skye Faith Campbell, which left him loaded with hope and optimism. ... "It's possible I could get a tryout when this virus slips out of here," Campbell told The News on Monday. ...

"If it does come to an end, I'm still thankful for everything that's happened to me in the game. ... Sure, I might look back and get sad a little bit because that was my dream -- that's what I wanted to do, keep playing football and make it my career and get paid for doing it at a high level.

"But like I said, I'm blessed to even wake up and still live, especially after everything that's going on in the world."

At Cass, where he graduated in 2016, Campbell had scholarship offers from Michigan State and Alabama "before two off-field incidents his junior and senior year left him in jail and ended his hopes of a Power Five Conference college career," Goricki recounts.

The Detroiter got back on track at Ferris State University, where his team reached the Division II national title game in 2018. He has one semester left before graduating.