Shouting Michigan Protest Man has a name and an address, and it isn't in California

Screaming Michigan Man has a name: Brian Cash. He is not an outside agitator brought in from California, as a widely circulated social media meme has it. He's just a blue-collar flooring installer from Oakland County, and what's more, he says he wasn't yelling at the cop whose face he appears to be all up in. 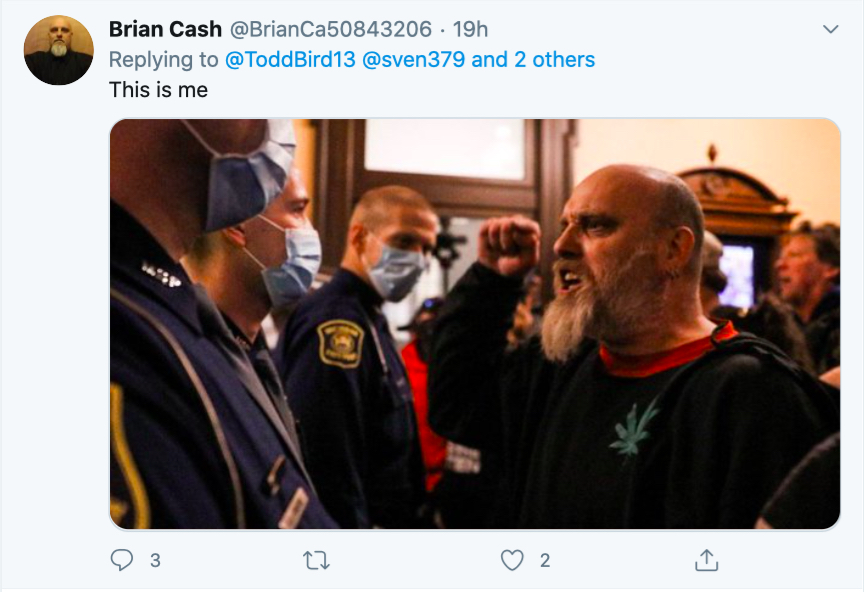 Take your seat at the table, Brian Cash. (Photo: Twitter)

He was yelling, he claims, at one of the Michigan Capitol police who, a day earlier, had dragged two women out of the gallery bodily.

The Freep has the story:

Cash, who said he has now been to four protests in Lansing in the past month, said he was demonstrating against the inequities of the governor's executive orders, which he called "just ridiculous."

..."I was there chanting, 'Let us in,' and I saw that guy and I just, I just kind of lost it a little bit," Cash said. He said that he was asking the man, whom he called a "red coat," a reference to the red coats they wear, "if he wanted to try to throw me around like he did that girl yesterday."

Cash appears to be a tossed salad of contradictions. He's not afraid of the virus and won't wear a mask, but also thinks the coronavirus was bred in a lab and intentionally released. He voted for Bernie Sanders in the 2016 primary, but Donald Trump in the general. And as for the leaf on his T-shirt:

He also is a marijuana advocate and said he was high during the interview with the Free Press. "If I'm awake, I'm high," Cash said. "But I'm not really high; I'm normal."