Big League Politics, founded by past Breitbart News staffers, quotes a founder of Michigan United for Liberty as saying: "The fake news outlet has completely lost their readership in recent years so they must collude with Big Brother in a last-ditch attempt to stay afloat."

That reaction by Jennifer Darling of the Michigan protest group is in a screed about Steve Neavling's investigative report at MT. Criticism of the online publication and of Facebook gets prominence at the top center of the national site, based in Washington, D.C.

The site's attack on Metro Times, which it calls a blog, says:

The top organizing group putting together anti-quarantine protests in Michigan has been removed from Facebook after a snitching campaign from the fake news media targeted the group.

The Michigan United for Liberty (MUFL) group was removed from the social media platform after the Metro Times tattled on the group because of messages posted in there that offended state Governor Gretchen Whitmer. ...

"The Metro Times, having lost its audience and ad money due to Governor Whitmer banning all nightlife, has responded to its imminent demise in one last show of hatred and lies," Darling said. ... The Detroit-area newspaper has to lay several workers off recently because nobody wants to pick up their phony rag any longer. 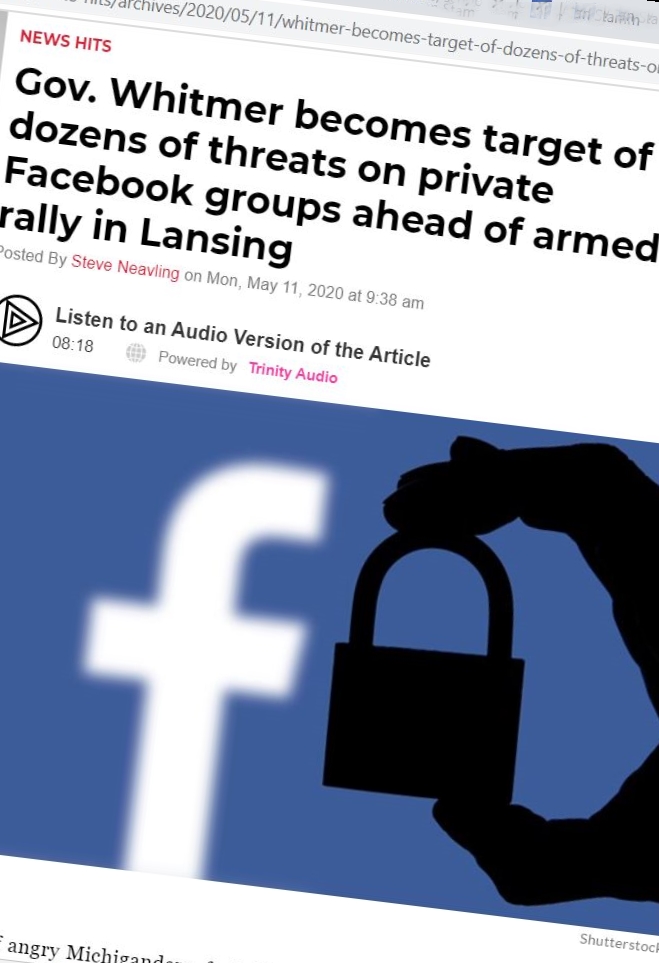 In his detailed article a day earlier, Neavling described what he saw after joining four private Facebook groups:

Dozens of angry Michiganders, fueled by conspiracy theories and disinformation about the coronavirus, are promoting violence and mobilizing armed rallies against Gov. Gretchen Whitmer on Facebook, in violation of the social media company’s policies. ...

On Sunday, after being contacted by Metro Times, Facebook removed one of the [private] groups, Michigan United for Liberty, and deleted posts on others for violating the company’s policy against inciting violence.