so it turns out President Trump did wear a mask at a private viewing of three ford cars ... after Ford chief Bill Ford encouraged the President to wear a mask.

He did wear it - but on the public portion of his tour he took the mask off. pic.twitter.com/8qRTMUQwhV

People wondered whether President Donald Trump would wear a mask during his visit Thursday to a Ford Motor Co. plant in Ypsilanti, which produces ventilators. The plant policy is to wear a mask, and Attorney General Dana Nessel issued an open letter Wednesday saying he should as "a social and moral responsibility." 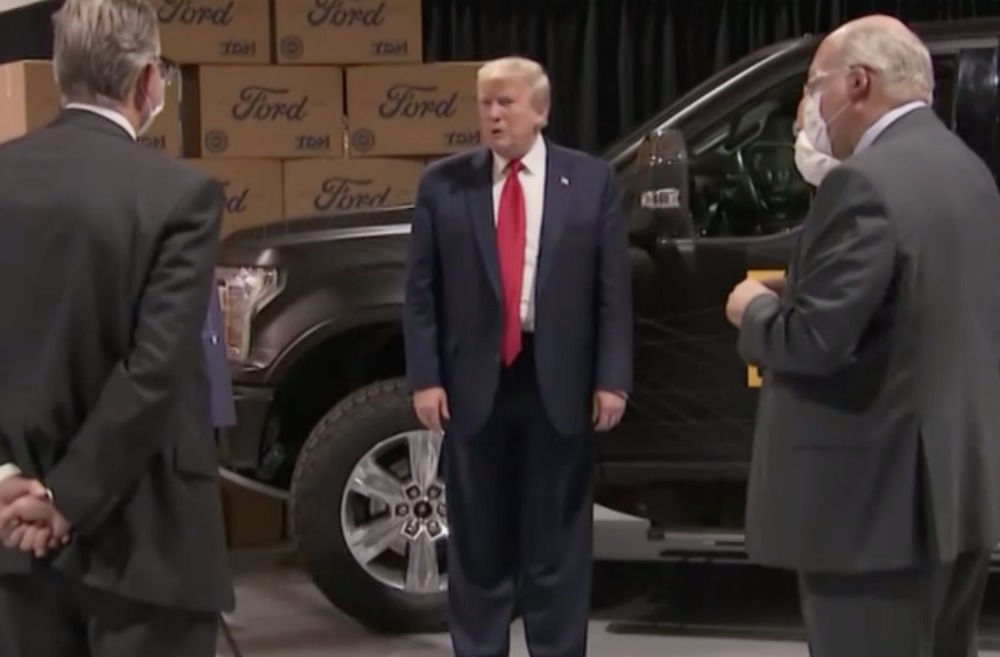 Shortly after 4 p.m., he was seen at the plant without a mask talking to Ford officials, who wore masks including Ford Chairman William Clay Ford Jr. and CEO Bill Hackett.

Trump, when questioned by reporters at the Rawsonville plant, said he had a mask on before in another area, but he was given a choice whether to wear one.

When asked if Trump was given a choice, Ford shrugged and said: “It’s up to him." The company later gave reporters a bit more:

Statement from the Ford Motor Company:

“Bill Ford encouraged President Trump to wear a mask when he arrived. He wore a mask during a private viewing of three Ford GTs from over the years. The President later removed the mask for the remainder of the visit.”

The president also said he didn't want to give journalists the pleasure of seeing him wear one.

Nessel tweeteed Thursday afternoon: "Trump refused to wear a face mask during his tour of the Ford plant in Ypsilanti today, despite numerous requests that he do so. Trump does not care about the safety of Michiganders."