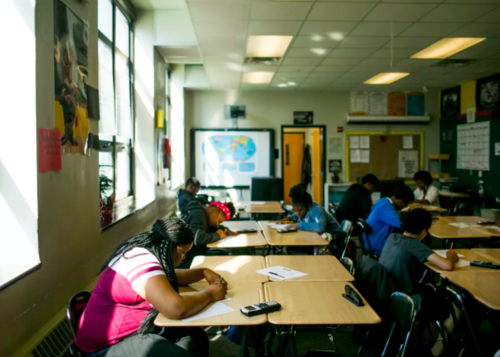 This story, "As the Detroit district recruits new teachers, they hope a boost in starting pay will entice candidates," was originally published by Chalkbeat Detroit, a nonprofit news site covering education.

The Detroit school district, as part of its quest to hire more experienced teachers, is boosting starting pay in the district to $51,071.

Here’s a breakdown of what teachers, new and existing, can expect for the 2020-21 school year:

They said the boosts, already built into the budget process for next school year, are crucial to efforts to recruit new teachers and reduce class sizes.

Higher starting salaries for beginning teachers, both those new to teaching and those with experience, could make the district more attractive at a time when schools find themselves continually fighting for a shrinking pool of teachers.

“Our strategy is to recruit teachers with experience, not brand new teachers,” said Nikolai Vitti, superintendent of the Detroit Public Schools Community District. “With that said, we would not turn a certified teacher with no experience away if they were an excellent candidate.”

From the time Vitti arrived in the district three years ago, he has said boosting teacher salaries is a priority. Teachers have seen pay increases, either with salary hikes or bonuses, in each of the last three years. Previously, during many years of control by state-appointed emergency managers, teachers saw their pay cut and loaned the district money.

“The District remains staunchly committed to improving compensation for all educators to ensure Detroit’s children have access to the highest quality teachers possible,” Iris Taylor, president of the district’s school board, said in a statement. “We will continue to work to make all of our teachers the highest paid in the state and country.”

Detroit isn’t the only district that has struggled with vacancies, particularly in some hard-to-fill subjects such as special education, math, and science. The district also is facing its own looming crisis: A third of the current teachers “could retire at any moment and another third of teachers could be in a position to retire in one to four years,” Vitti said.

“If we do not act with a sense of urgency regarding the recruitment of teachers to DPSCD then we slow the progress our children are making and own the failure to develop a long-term strategy to prevent the vacuum that a mass retirement could create over the next five years.”

Recruiting teachers could also be important as schools attempt to reopen in the fall, after more than three months of remote learning due to the coronavirus pandemic. Most expect health concerns to remain in September, and in order to maintain social distancing, classrooms likely will have to hold fewer students. That could mean more teachers would be needed. Gov. Gretchen Whitmer has created a panel at the state level that will plan for the safest way for students to return to school.

The district is near the end of a three-year contract with the Detroit Federation of Teachers. Terrence Martin, president of the union, emailed members after the starting salary increase announcement.

“We look forward to continuing a larger discussion with the district that results in increased salaries for all those we represent,” Martin told them. “You are highly valued members of our school district, our community, and have remained committed to providing our children with a quality education. We will always fight for what is fair and equitable for all unit members.”