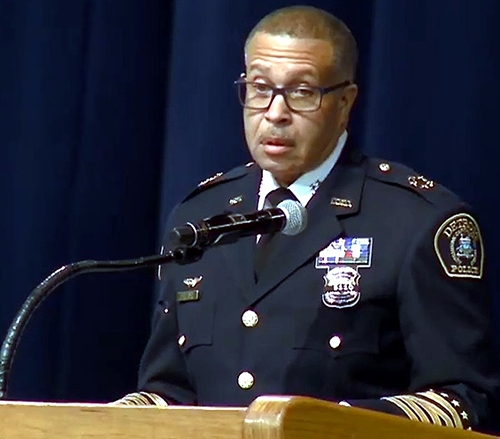 James Craig: "There's an expectation, in order to build that trust, that we're always honest and forthcoming."

Detroit Police James Craig joins police officials nationwide in condemning the Memorial Day death in Minneapolis of George Floyd, saying there "was clear evidence to suggest there was probable cause to arrest this officer for murder."

“Trust is the glue. We must not forget as police officers we work for the community," Craig said at a Thursday press conference with community leaders, including including Rev. Wendell Anthony, president of the Detroit branch of the NAACP. "There's an expectation, in order to build that trust, that we’re always honest and forthcoming. When we make mistakes or if there’s intentional wrong done, we own it, we stand up and take responsibility for it.”

The video of the incident, which has gone viral, shows an officer with his knee pressed on the neck of Floyd, who said he couldn't breathe. Floyd was suspected of passing a bad check.

The incident has renewed cries of systemic racism in the country, with people pointing to other recent incidents including the killing of a black Georgia jogger and a New York City woman who called 911 and falsely told police that a black man, who was a bird watcher, was attacking her in Central Park. He had asked her to leash her dog, as required.

Dallas Police Chief Renee Hall echoed Craig's sentiments, saying: "I stand with the rest of my colleagues and major city chiefs and we all agree that this behavior should not be tolerated, and it does not represent who we are."

Craig applauded Minneapolis Chief Medaria Arrandondo for firing the four officers, and said the one with the knee on the neck, Derek Chauvin, should face a murder charge.