In Detroit Tuesday night, some protesters arrested while demonstrating against police brutality were taken to Little Caesars Arena for processing. 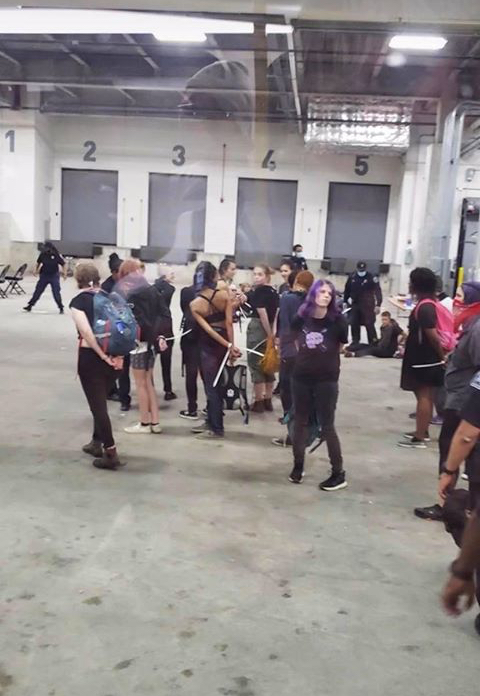 A photograph began circulating on social media Wednesday of a group of handcuffed protesters, most or all of them women, standing in a Little Caesars loading dock with Detroit police officers nearby. LCA is operated by the Ilitch organization, with construction partially funded by taxpayers, through a tax increment financing structure. Public funding amounted to $324 million of the $862 million project.

The arena has been idle in recent months as sporting and entertainment events were cancelled due to the coronavirus pandemic and stay-at-home orders.

A legal-community source confirmed the action, and said those taken to LCA were most likely ticketed and released.

Chris Ilitch, who leads the family's businesses, was among a group of Detroit corporate leaders who spoke against racism and injustice Wednesday morning at City Hall. The group included Mary Barra, CEO of General Motors; Bill Ford, executive chairman of Ford Motor Co.; and others.

"I love this city," Ilitch said. "It’s why we’ve grown our businesses here. We are proud and privileged to call Detroit home. With with that comes a responsibility to lead and uplift the community in times like this."

A spokesman for the Ilitch family's Olympia Development said Police Chief James Craig "requested to use the facility for safety reasons and we supported his needs."

The facility is being provided to the department at no charge.

At a Wednesday news conference, Craig said he was unaware of the details of the arrangement.

"I don’t know how the contact was made, but they certainly agreed to it," he said.

Some find it disturbing that a sports and entertainment complex funded with public monies sits idle and is now being used to process people arrested for protesting police brutality.

"Once envisioned as the centerpiece of a 50 block high-density mixed-use development, the Ilitches Little Caesars Arena in The District Detroit is now serving as a facility to detain protesters," wrote the anonymous author of the Facebook page, the "Terrible Ilitches."

More than 300 people have been arrested across five nights of largely peaceful demonstrations against police brutality in Detroit. Protesters have also been processed at the Detroit Detention Center on Mound.

Violet Ikonomova contributed to this report.