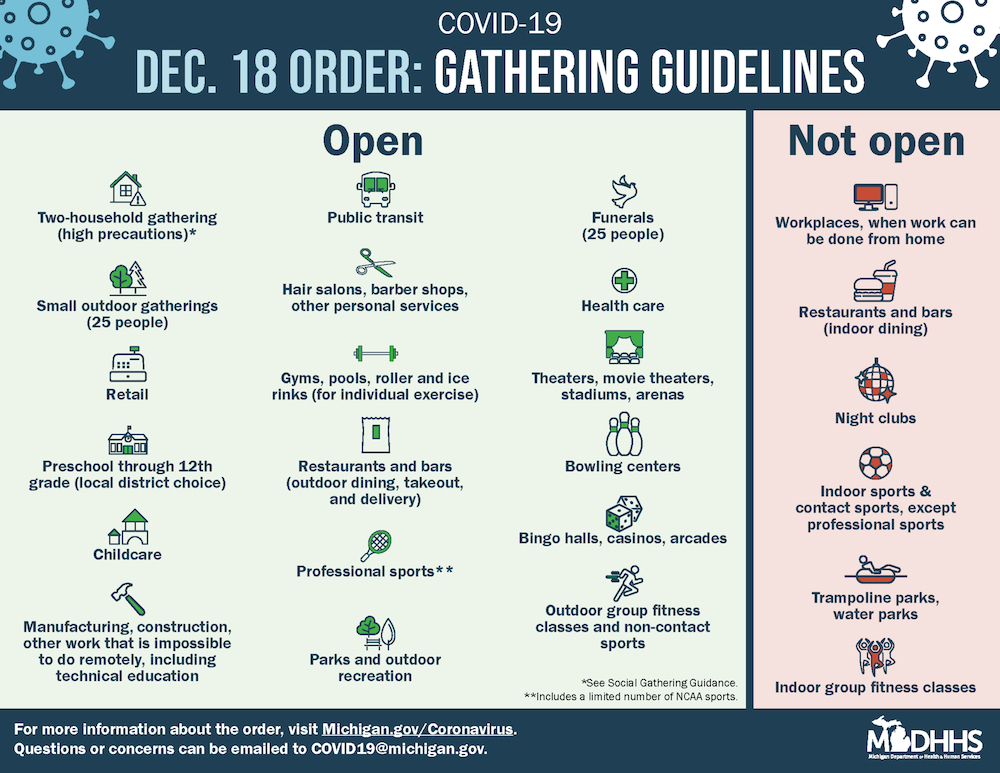 Indoor bars and restaurants will remain closed while some entertainment venues can re-open and students can return to in-person learning, Gov. Gretchen Whitmer said during a Friday news conference updating the state's pandemic restrictions.

Starting Monday, high schools — which would be on winter break — can resume in-person teaching, while colleges and universities can on Jan. 19. Indoor venues where people can stay masked and socially distanced — like bowling alleys, movie theaters and casinos — can reopen without concession sales.

The order expires Jan. 15, but Whitmer said additional restrictions could be lifted if cases continue to drop.

Things have been trending in the right direction since the state health department's "Pause to Save Lives" began Nov. 18, Chief Medical Executive Dr. Joneigh Khaldun said. Daily cases have been cut by more than half to more than 4,000 new cases added yesterday; the statewide test-positivity rate has dropped to under than 11 percent, and the percent of hospital beds has declined 17 percent over the past 11 days. However, Khaldun said, daily cases remain six times higher than they did in teh beginning of September.

The governor grew emotional during the news conference as she noted the Thursday death of Wayne County Sheriff Benny Napoleon, who she said succumbed to Covid-19 despite following safety protocols.

She blasted Washington for dragging on another round of stimulus funding for states and citizens and called out the Trump administration for failing to deliver as many vaccine doses to Michigan as promised.

"We have Michigan hospitals ready to adminsier this vaccine and the bottleneck appears to be the White House and I can't get an answer why," she said. "Here's what I could ask if I could get them on the phone. Where are our doses? what is holding them up? When can we expect them?"

The state was to receive 84,000 doses next week but now expects only 60,000, the health department says. Michigan got 84,825 doses from Pfizer's first shipments this week.