People will grab whatever hope they can in these dark times.

And so it is that a Twitter account with the handle @Dr13600962 received nearly 20,000 retweets in 13 hours Saturday with the promise of free housing for families in need in the area of Detroit and Dearborn. 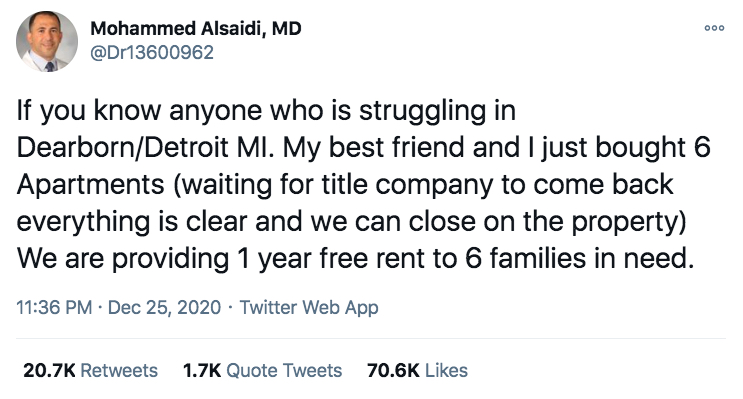 The tale was elaborate: @Dr13600962, who said he was Mohammed Alsaidi, a doctor at Beaumont in Dearborn, was about to close on six apartments where he and his best friend planned to let six families live rent-free for one year. The seller had taken a $17,000 hit to help them achieve their goal. They were just waiting for the title company to come back and say everything was clear.

One unit had already been promised to a woman in need, @Dr13600962 said. He asked that whoever suggested their sister, a single mother of two, please pass along her information.

But @Dr13600962 is not Dr. Mohammed Alsaidi of metro Detroit, and the promise of free housing is almost certainly fake too.

We reached the real Dr. Alsaidi via FaceTime early Saturday afternoon and found he had no knowledge of the Twitter account bearing his Beaumont work photo and name. The real Dr. Alsaidi has never had Twitter and, if he did, says he would certainly never use it to promote political views, like @Dr13600962 ("Follow me back Biden Supporters. #BLM #Muslim Lives Matter").

But most importantly, Dr. Alsaidi is not about to close on six apartments to give to six families in need. 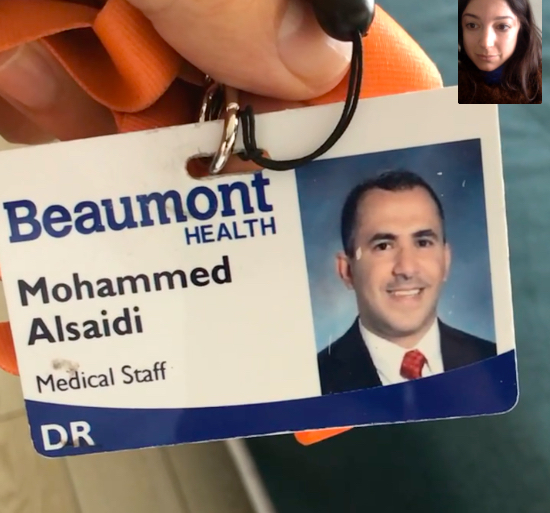 The real Dr. Alsaidi shows us his work ID over FaceTime on Saturday.

"This guy is a scammer," the real Alsaidi said when told of @Dr13600962. "He’s doing something illegal to start with and I hope people don’t get hurt by him."

The account was taken down shortly after this story was published.

The true aim of the person behind @Dr13600962 is unclear. The account was created in November and had mostly praised Joe Biden and disparraged Donald Trump, noting in its bio that it had been suspended six previous times.

After the viral tweet, @Dr13600962 repeatedly promoted a woman's unrelated GoFundMe "to bring my 4 kids who are American citizens home from Yemen" because "my ex husband kidnapped them." More than a dozen people donated $730 to the five-day old fundraiser within an hour of @Dr13600962 mentioning it. "I have fully verified her story, it's 100% legit," the account wrote.

The woman listed as having created that GoFundMe, Sara Mohy-al-ddein, said in a phone interview that the fundraiser is legitimate and that she reached out to @Dr13600962 to promote it, despite not knowing him personally. She said she sent the account photos of her license and children's passports.

Her image then appeared on a CashApp that @Dr13600962 promoted six days ago, saying it belonged to a woman who needed financial help because her husband had just died of Covid. The name on the CashApp was Sara Alsoofi.

@Dr13600962 also teased another possible GoFundMe to raise money for appliances for the apartments, if fabled talks for a donation from appliance maker LG fell through.

As for the real Dr. Alsaidi, he says he may call the police, as his identity has previously been stolen twice.