The Anonymous Cop: Capitol Police were right not to shoot during insurrection

This is the latest column by a veteran Southeast Michigan police officer who’ll be identified after he retires in the next few years. He answers reader questions and provides perspective on police issues.
Send questions to
anonymouscop@deadlinedetroit.com.  Follow him on Twitter (@AnonymousCopDD) and Facebook.

Here’s my hot take on Wednesday’s events in Washington, D.C.

You might think you don’t need to read one more thing about it. I’ve heard from my partner, colleagues, mother-in-law, friends and everyone else on social media as to what they think the various police forces should have done as those idiots stormed our nation’s capitol.

Most of their conclusions center around criticism of why police didn’t use potentially deadly force against a violent mob of trespassing vandals, so here’s my thinking based on what I know:

If anyone really wanted an outcome that’s different from what happened, maybe the fire department should have been in charge.

Firefighters, you see, are the experts at protecting property. They routinely risk their lives to protect property that’s burning -- houses, businesses and even Dumpsters. Firefighters climb onto burning roofs and run into flaming buildings to save material things. They hose down the trouble.

After decades of working with them, I still don’t quite know why. They’re good and brave people, but when is property ever more valuable than human life?

So why not just call them when the symbolic heart of our nation is endangered? (OK, that might be sarcastic.)

Because cops, let me tell you, don’t give a rat’s ass about property. Life is what we are sworn to protect even when we don’t agree with how that life is being lived.

So with that background ... 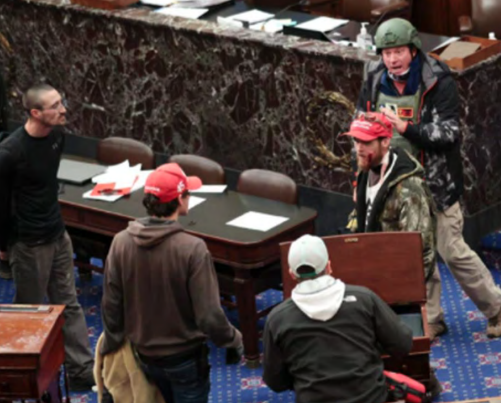 Inside the Capitol on Wednesday (Photos: District of Columbia Police Department)

If you really look at what happened on Wednesday, the police and security teams did a great job and performed exactly as they are supposed to. They did what good and well-trained officers or any officer with a sense of duty and a heart is supposed to do. They did what they were sworn to do and were trained to do.

They saved lives. Maybe not the ones you would judge most worthy, but that’s not a call we make in the field.

That’s what cops do. Not always perfectly, but it’s what our instincts are and what good cops will base their actions on.

In Washington on Wednesday, police safely evacuated all of the staff and elected officials from danger. Not one of them was injured or killed. No cops stopped to pick a legislator whose politics matched theirs.

In our world, any call to your neighborhood can be life-threatening for the people that called us -- you, neighbors -- and us.

So who gives a shit about a broken statue or who sits in someone’s chair? Stop your outrage – which is justified, I get it – about the whole event and think in terms of the real-time decisions.

Yes, I know. It’s hard. Our representatives and their staffs were in danger, as were journalists who courageously held their ground to bring us the story. My mother-in-law said she was physically ill at seeing a Confederate flag waved in those hallways. The disrespect for institutions is part of a bigger problem. I get it. But …

Should the cops really have shot someone for any of that? No matter how abhorrent the thinking of the perpetrators?

We cops are trained – and I firmly support this – that you don’t ever risk lives for property.

When I was a brand, spanking-new cop, one of my training officers who had decades on the job as a street cop drove home the point that we don’t risk our lives or anyone else’s simply for property.

Chasing a stolen car that’s running through red lights at over 100 mph during rush hour? Stop the chase. It’s just a car covered by insurance. It’s not worth causing an accident that kills an innocent parent and a child.

That’s not quite what happened in D.C., but the principles of weighing human lives against property were at play. Not that I agree with any damn thing that mob of morons or their “leader” purports to stand for.

But here’s what I saw from a logistical, police point of view: 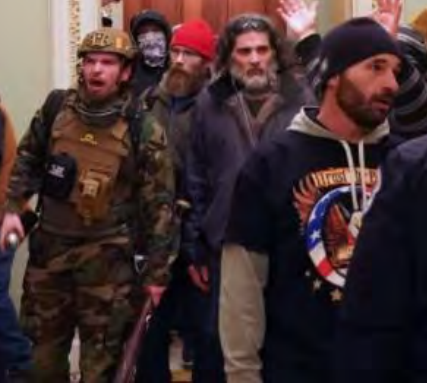 U.S. Capitol Police offers were attacked by overwhelming numbers of rioters. Reports later this week say they were ill-prepared in part of because of the lack of multi-agency planning and denials for the “riot gear” so many people have pointed out were missing.

Those cops, knowing they couldn’t hold a perimeter at further-out position, first pulled back to the building’s doors and then retreated to a tighter defensive position within the inner chambers.

They did this while effectively dividing their forces so that an adequate number of police could secure and lead the occupants of the Capitol Building to safety while the others did their best to hold the invasion at bay and protect that evacuation.

Yes, one person was fatally shot. Writing this barely 24 hours after it happened, I don’t know the exact circumstances: maybe it was justified and maybe it wasn’t.

But the officers should never have, as a group, fired into that crowd and I’m glad they didn’t.

There’s no reason to take the lives of people who are breaking a window or waving a flag in hallway even if they are not authorized to be in that spot. The officers focused on the job they swore to do and safely evacuated personnel under the orders and resources they had, from what we know at this time.

Who wants Kent State on the Capitol steps?

Potential “victims” who would have been wounded or killed are not worthy of the inevitable sympathy they'd have received. When the officers eventually received reinforcements, they retook the ground they gave and secured the building.

So who’s at fault? U.S. Capitol Police bosses. Defense Department officials that denied requests for equipment or personnel, as reported by The Washington Post and others.

The preparations were a joke. They have known since November that there was going to be a large, angry protest Wednesday.

That’s the big difference between this debacle and what happened with racial justice demonstrations last year. Departments, including Washington D.C.’s, were prepared with enough personnel. They had adequate plans for the “Black Lives Matter” events, and they put them into action to control the crowds. The cops’ reactions there were textbook when adequate personnel is in place.

But this week? Poor planning is the politest way to say it, as National Public Radio has reported. Whatever your comparisons between this police action and others for the racial protests, they should be made at the administrative level, not for those cops on those lines.

There should have been barricades and a mass of officers present, trained and equipped for crowd control. It’s better to have it and not need it than to need it and not have it.

The administration of the U.S. Capitol Police miserably failed its officers and those they swore to protect. The chief shouldn’t be the only one to resign. More brass should be held accountable at whatever agency bears the blame.

At the horrible scene, the officers did what they should have done, what all officers should do in the specific circumstances they were in: protect lives whether or not they agreed with what those lives were representing at that moment.

And spraying that crowd with a cold firehouse would have been effective and symbolic. That’s where firefighters really could have handled this.