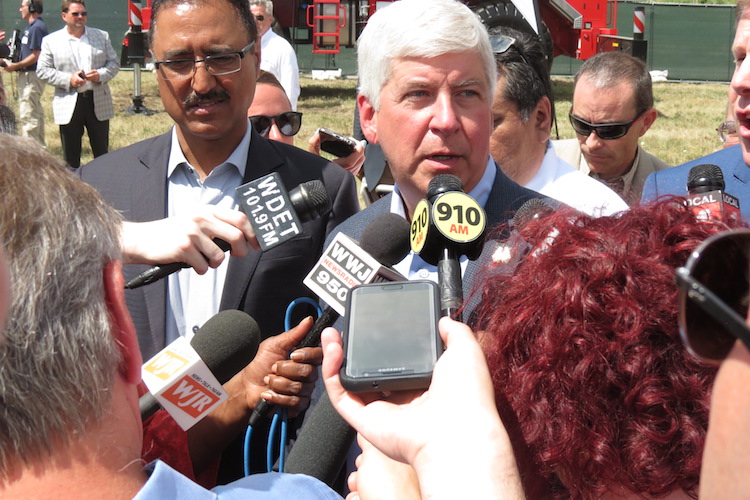 A total of 42 criminal counts stem from "a series of alleged actions and inactions that created the historic injustice of the Flint Water Crisis," Attorney General Dana Nessel announced Thursday.

Snyder faces two counts of willful neglect of duty, each with a maximum penalty of a $1,000 fine and/or a year in prison -- though he's unlikely to serve time if convicted. He pleaded not guity at a Thursday morning arraignment and is due back in court next Tuesday for a hearing.

"There are no velvet ropes in our criminal justice system," Hammoud is quoted by AP as saying. "Nobody, no matter how powerful or well-connected, is above accountability when they commit a crime."

The ex-governor's lawyer, Brian P. Lennon of Grand Rapids, says: "It would be a travesty to waste additional taxpayer dollars pursuing these bogus misdemeanor charges. We are confident Gov. Snyder will be fully exonerated if this flimsy case goes to trial." (Via a tweet by AP reporter David Eggert.)

♦ Jarrod Agen, Synder's former communications director and chief of staff, Executive Office of Gov. Rick Snyder: One perjury, count, a 15-year felony. The charge is based on statements he made during an investigative subpoena interview in February 2017 by aides to former Attorney General Bill Schuette, according to the special prosecutor.

Ex-Michigan Gov. Rick Snyder is charged with two counts of willful neglect of duty stemming from an investigation of the Flint water crisis, the Associated Press reports.

The misdemeanor counts are punishable by up to a year in jail and a $1,000 fine. State Attorney General Dana Nessel has scheduled a Thursday press conference.

It's the first time a current or former Michigan governor has been charged for crimes related to the office, AP reports. Snyder’s lawyer, Brian Lennon, told the wire service he could not immediately comment.

The fact that Snyder faces misdemeanor charges, not felonies, means he's got a far better shot of staying out of prison if convicted.

Charges are also expected against other Snyder administration officials, including his state health director and a senior adviser.

Snyder, 62, who served as governor from 2011 to January 2019, had a promising political career that came to a screeching halt after the scandal surfaced. Up until then, he had mentioned a vice presidential candidate, and he even flirted with running for president.