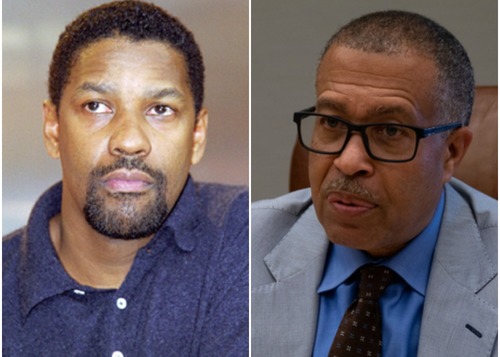 Detroit police chief James Craig was nicknamed "Hollywood" upon returning to the city in 2013, in part for his previous role at LAPD and for frequent on-camera appearances.

But the name is more apt than we knew, because it turns out that while in LA, Craig trained actor Denzel Washington for a police role.

Fox 2 reports Washington recently recounted his time with the chief in an interview, saying it's had a lasting impact and helped shape his approach to a number of characters. In 1991, Craig, then a sergeant, was paired with Washington for an eight-hour ridealong, the same year officers brutally beat Rodney King in an incident that stoked division between the Black community and police.

Denzel Washington wanted to follow a Los Angeles cop for his 1991 hit movie "Ricochet."  A mutual church friend suggested James Craig, who was a sergeant at the time.

The actor rode along with Craig for eight hours, but it was him responding to a call of a mentally ill man with a gun, and the way Craig was able to stay calm and de-escalate the situation is what stayed with Washington, which he was able to use as a reference then, and in his latest crime thriller "The Little Things."

"(He said) 'How you de-escalated the situation to me, that's what defines who you are and what the vast men and women who serve in police and military,' and so that meant a lot to me," Craig said.

Craig tells Fox 2 that Washington recently called him and they spoke for an hour and a half. The actor told the chief he hopes to visit the city, and Craig promised to take him to a "great" restaurant.

The chief has increasingly become a divisive figure in Detroit, standing by officers who clashed with racial-justice demonstrators last summer and making frequent appearances on Fox News.