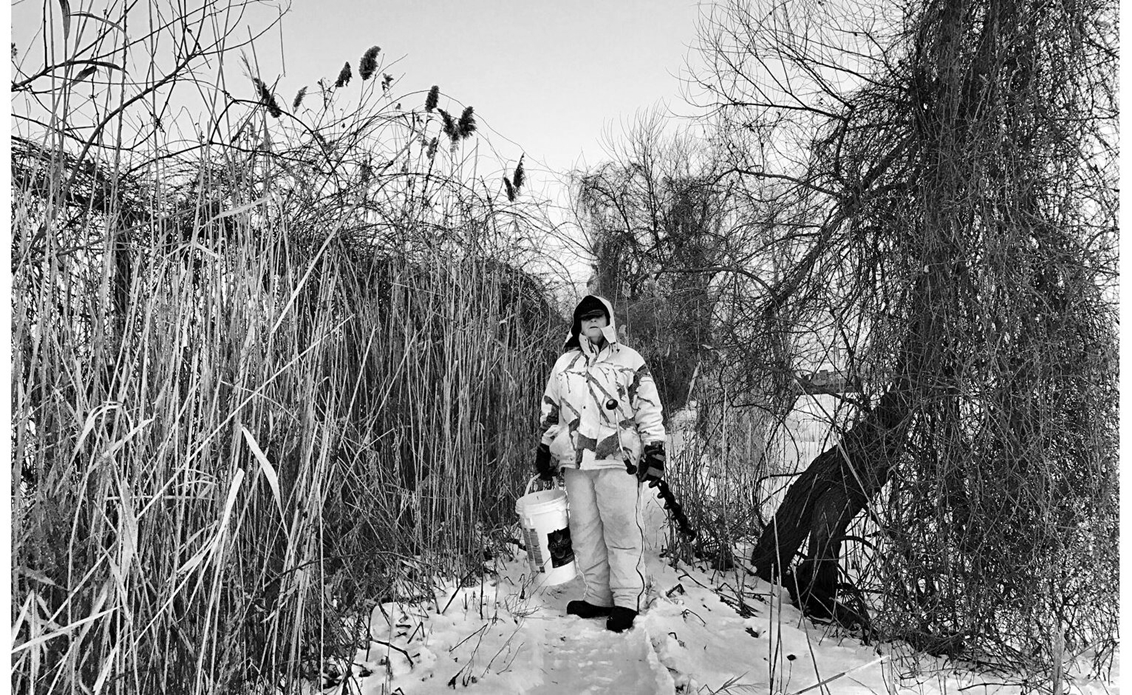 The Detroit photographer dedicates the nine-week exhibition to her dad, above. (Photos: Amy Sacka) 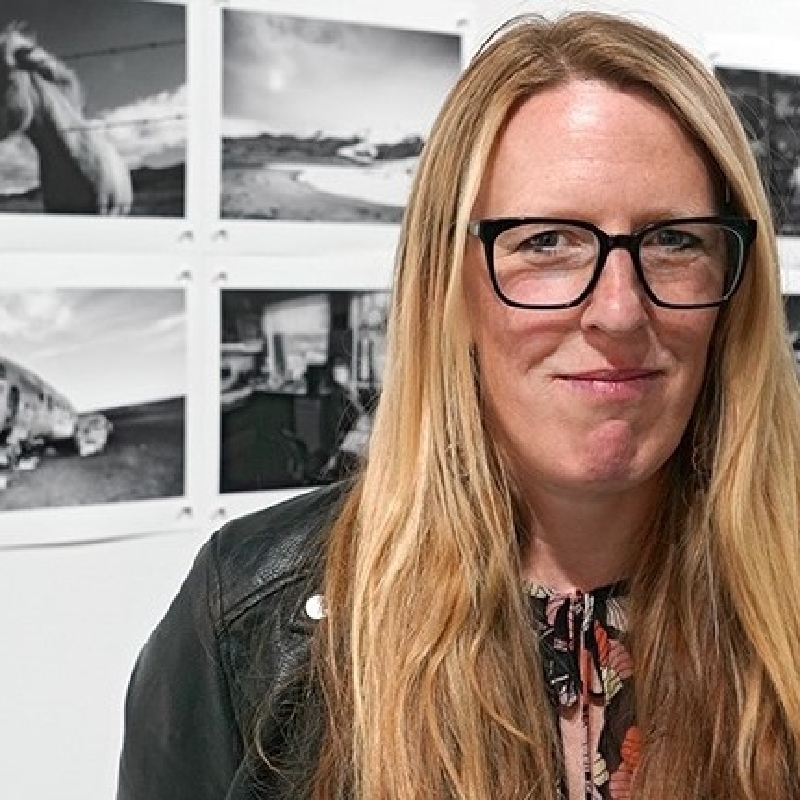 Amy Sacka: "I'm out there doing what I’m passionate about." (Photo: Facebook)

The "immersive exhibition," as the museum calls it, features indoor and outdoor photos alongside other works and artifacts related to winter culture and climate change in Michigan. Local artists Scott Hocking and Michael McGillis created a life-size fishing shanty and Valaurian Waller contributed Detroit River photos. Also on view is a 1920s ice fishing shanty bought from the Sportsman’s Haven Museum in Sebewaing on Saginaw Bay.

Sacka, a freelancer who often focuses environmental themes, last year illustrated a 22-page National Geographic feature on diminishing winter ice on the Great Lakes. She returns to that topic in "Last Ice." 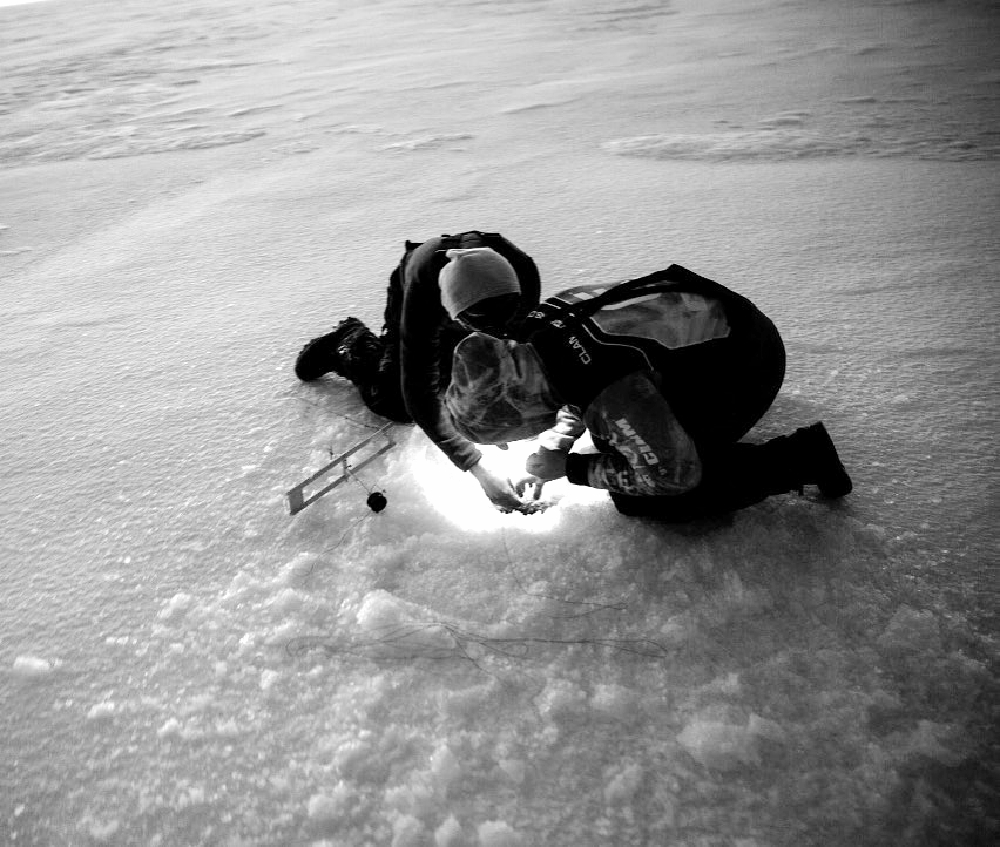 Dipping for a catch on Lake Michigan at dusk.

The Detroiter, who grew up in Grosse Pointe Woods and now lives in Detroit near the river, tells Planet Detroit publisher Nina Ignaczak: "I have a personal connection to this work because of my dad."

"My father has been ice fishing on the Great Lakes for about 50 years. About five years ago, I decided to go out on the ice with him, mainly just to get to know him better. This is something that he absolutely loves.

"And when I was out on the ice. I would hear the same story repeated over and over and over, by him and by other people on the ice, which was that the ice seasons are getting shorter. ... I've put my heart into it, because I’ve seen how the effects of climate can affect the people I love and the culture that I'm a part of."

Winter anglers have "a deep reverence for nature," adds Sacka, also defining herself. "People do it because they love it." She has traveled more than 30,000 miles in Michigan to photograph ice fishing in Escanaba, Saginaw Bay, Oscoda, Tawas, Houghton Lake, Lake St. Clair and all five Great Lakes.

She describes herself as "passionate about celebrating the beauty of the people and culture of the Midwest through documentary photography." In the recent Planet Detroit interview, the University of Notre Dame graduate says:

The lens artist has an equally stylish way with words, as shown by this riff last Sunday with a Facebook photo of a woman in a Lake Erie shanty off Rockwood:

There are footprints on the dock in the snow but I'm the only one here. This is where my father comes for first and last ice. Normally at this time, a village of ice anglers sit on downturned buckets, rods cast into perfectly angered six-inch portals.

I wish that I could dive into those small spaces where silvery fish swim between the weeds, the heavy military boots planted around the holes overhead. I'm told by men who resemble my father that the ice represents a silence that spreads out and forms a connective tissue between them.

Sometimes I imagine my mother in the car after dropping off my father to go ice fishing. She watches him walk through a field to that icy unknown space, nervously watching him walk and walk until he gets there. Her hands reaching up to shield the sun from her eyes. 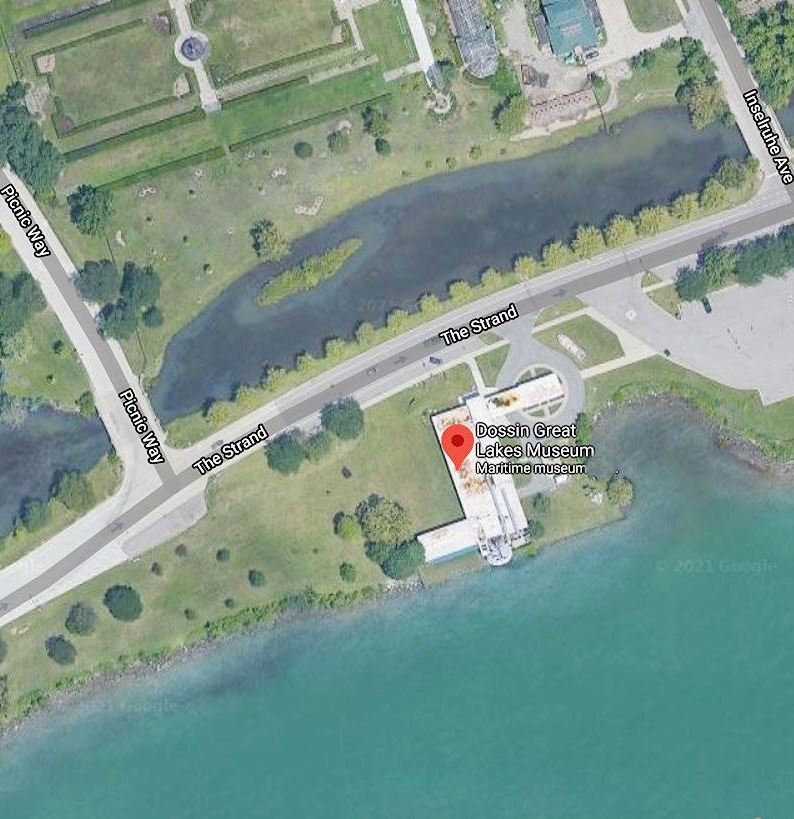 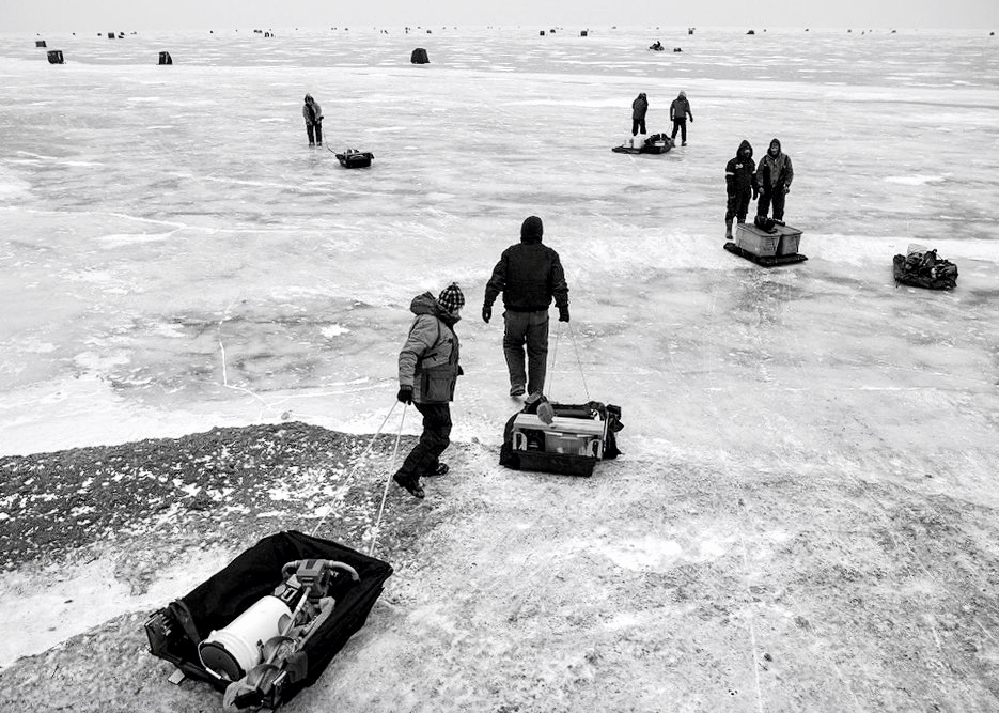 Heading onto Lake St. Clair. "The ice represents a silence that spreads out and forms a connective tissue." 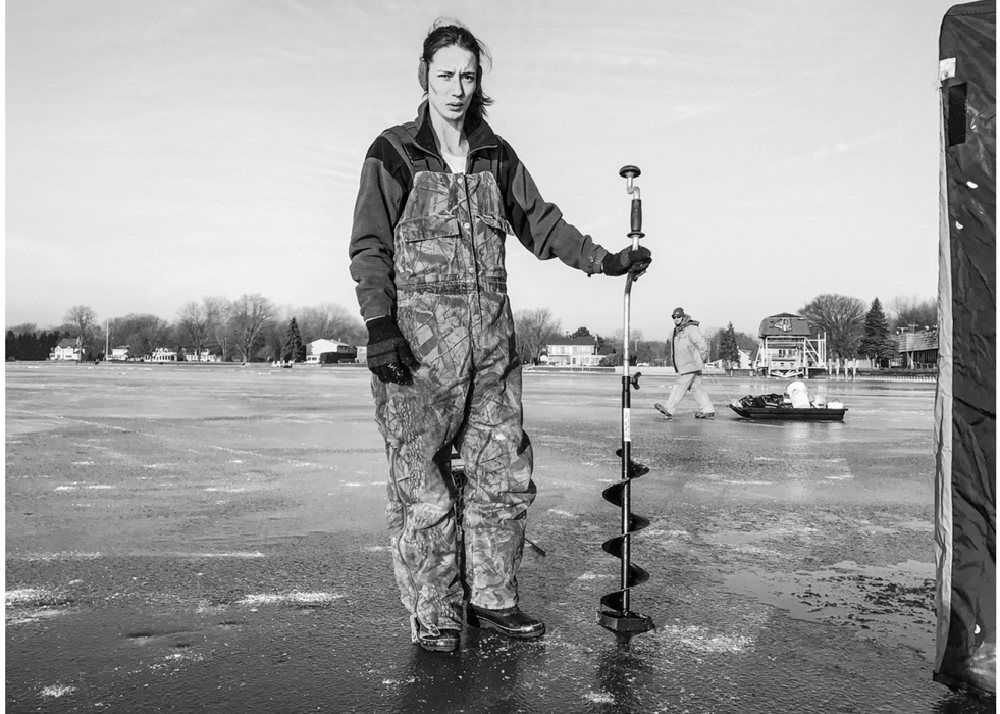 "You have to be a pretty hardy individual to go out there and spend time on the ice," the photographer says in a Planet Detroit interview. "But people do it because they love it." 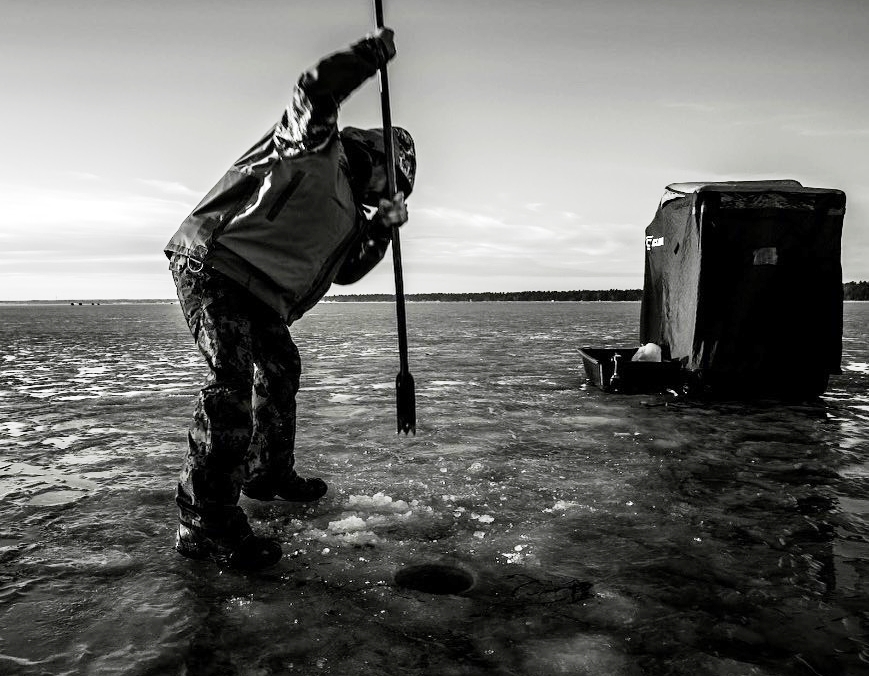 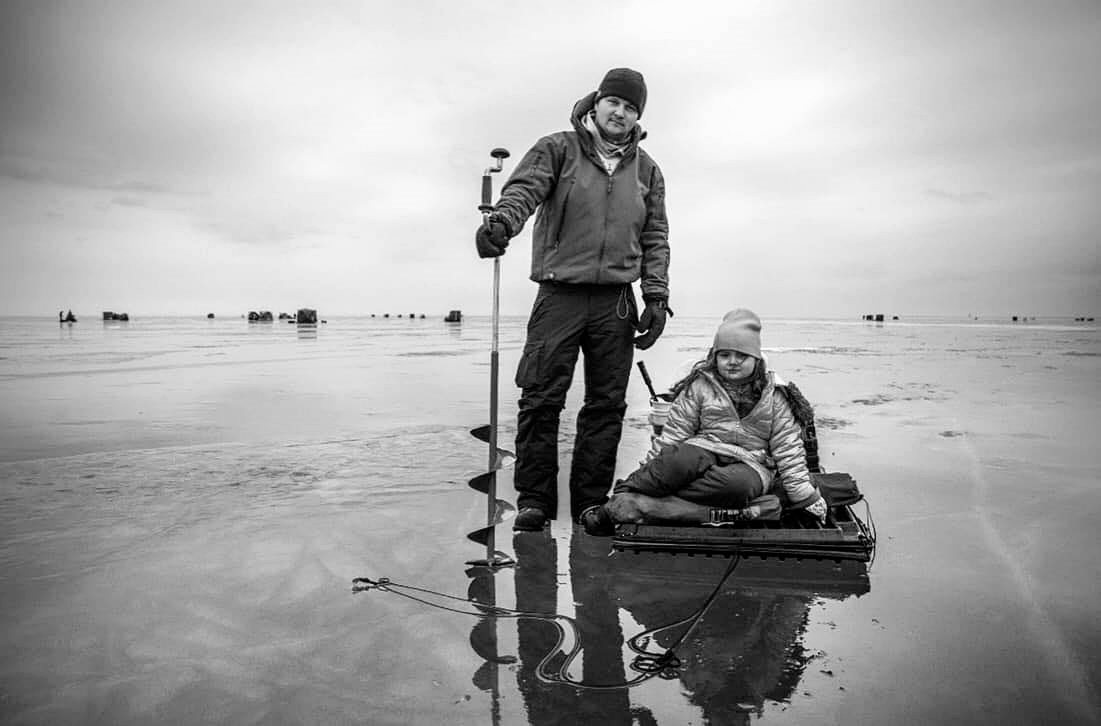 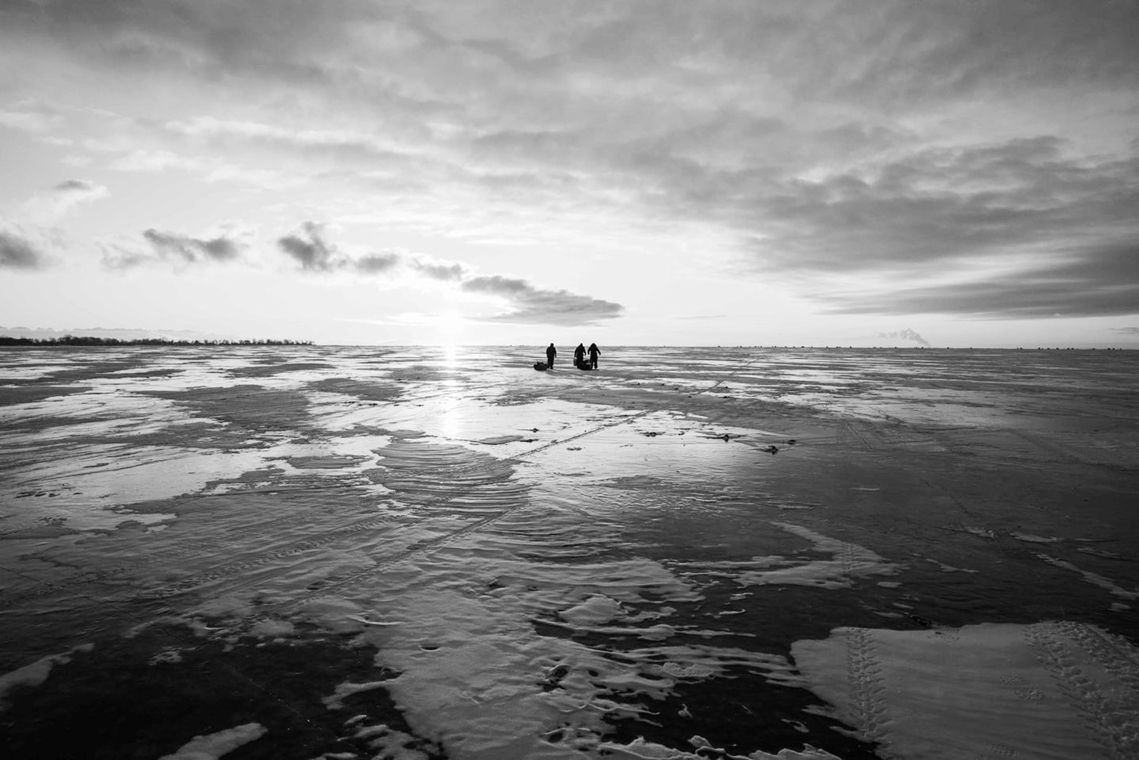 "The ice seasons are getting shorter."