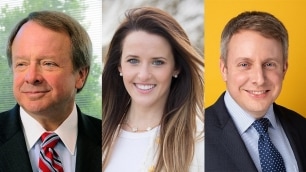 Time for the younger generation to step up.

Assuring that relatives carry on the tradition of their namesake, two great-great grandchildren of Henry Ford, founder of Ford Motor Co., plan to join the company's board of directors.

Alexandra Ford English, 33, the daughter of Ford Executive Chairman Bill Ford, and Henry Ford III, 40, the son of Edsel B. Ford II, have been nominated to stand for election to the company’s board of directors at its annual meeting of shareholders on May 13, the company said in a press release Friday.

"Their nominations to the board continue the Ford family’s nearly 118 years of active involvement with and stewardship of the company," the Dearborn-based auto giant said.

The move comes as Edsel B. Ford II, son of the Henry Ford II, aka "Hank the Deuce," plans to retire from the board of directors in May after 33 years. Ford, 72, currently is on the board’s Finance Committee and Sustainability and Innovation Committee.

Ford English is currently a director in Corporate Strategy at Ford, responsible for enterprise, connectivity and digital network strategic plans, according to the release. Before that, she was director of market and operations for Ford Autonomous Vehicles, and responsible for the deployment and operations of Ford’s autonomous vehicle business in Miami, Austin and Washington, D.C.

She is also Ford’s representative to the board of directors of Rivian, the electric carmaker in which Ford owns equity  Before joining Ford in 2017, she ran merchandising divisions for Tory Burch in New York and Gap Inc. in San Francisco. She has a bachelor’s degree from Stanford University and an MBA from Harvard Business School.

Henry Ford III, 40, is a director in Ford Investor Relations. Since joining the company in 2006, he has held positions in labor relations, purchasing, marketing, sales and corporate strategy. He was part of the team that negotiated the 2008 master labor agreement with the UAW.

He also played a role launching the latest Ford GT, the company said. He has a bachelor’s degree from Dartmouth College and an MBA from Massachusetts Institute of Technology, Sloan School of Management.

“Henry and Alexandra are both passionate and capable young business leaders who care deeply about Ford Motor Company and the welfare of our customers, employees, dealers and shareholders,” Bill Ford said in a statement “I am pleased and proud that we have a new generation of Ford family leaders who believe in serving the company and ensuring it remains a successful and positive force in the world for years to come.”