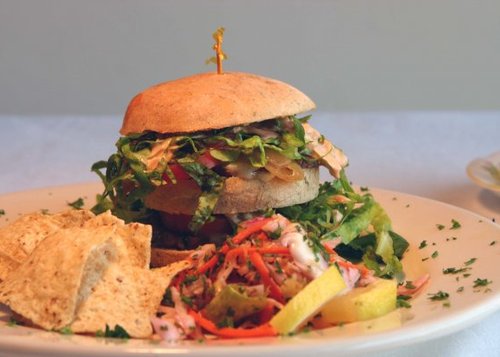 The business, Inn Season Kitchen, plans an early May debut of a fast-casual outlet at 32867 Woodward Ave. in Royal Oak. That store is currently occupied by GreenSpace & Go, which closes March 31. Greenspace is owned by local cardiologist Joel Kahn, a contributing columnist to Deadline Detroit.

“I’m so pleased to be able to offer some of Inn Season’s fan favorites like our Budapest mushroom soup, the Big Baprawski burger, desserts, gluten-free items and more in a fast-casual format, and to carry on the plant-based tradition at this location,” says Inn Season owner Nick Raftis in a statement.

“It’s good timing, given that Inn Season Café has been closed for renovations since early last summer.”

Kahn had another Green Space restaurant on 9 Mile Road in Ferndale, which opened in 2015 and closed last year.

“The joy of our plant-based journey has been to serve hundreds of thousands of healthy meals in the Detroit area since 2015," Kahn said in a statement. "Passing the baton to Inn Season Kitchen continues that commitment and my wife Karen, my son Daniel and I couldn't be happier or more grateful.”