The words "threatening violence" and "Gretchen Whitmer" appear near each other again in the first sentence of news coverage.

The topic this time is a New Yorker's arrest after a three-month federal manhunt ended Friday in central Florida, Robert Snell reports in a Detroit News scoop:

Jonathan Joshua Munafo, 34, of Albany was arrested and charged with communicating an interstate threat in the latest case alleging extremism in Michigan. The case was unsealed Friday, six months after the FBI said agents thwarted a plot to kidnap and kill Whitmer involving at least 14 people who are facing state and federal charges. 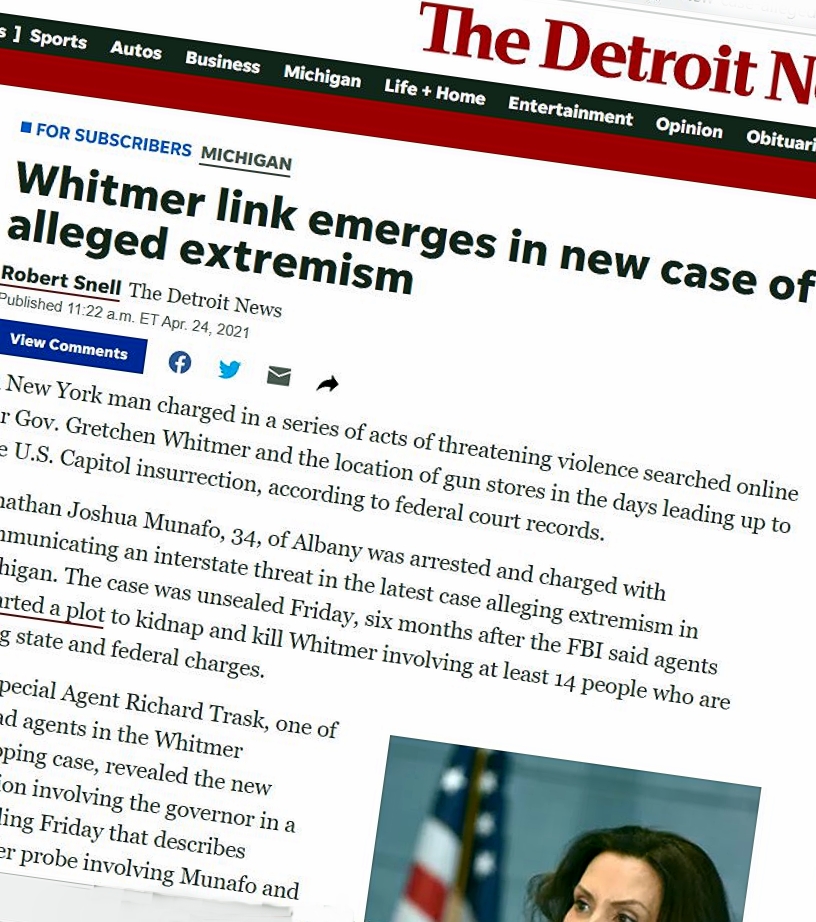 Munafo, though not tied to that fall 2020 plot, showed unexplained interest in her and in a mid-Michigan sheriff's department. He "searched online for Gov. Gretchen Whitmer and the location of gun stores in the days leading up to the U.S. Capitol insurrection, according to federal court records," Snell writes.

FBI Special Agent Richard Trask, one of the lead agents in the Whitmer kidnapping case, revealed the new allegation involving the governor in a court filing Friday that describes a broader probe involving Munafo and threatening phone calls earlier this year. ...

On Jan. 5, one day before the U.S. Capitol insurrection, a man who identified himself as "Yankee Patriot" made repeated threatening phone calls to Calhoun County emergency dispatch. "The caller, later identified as Jonathan Munafo, placed approximately 143 calls demanding to speak with a deputy sheriff or sergeant, tying up the emergency line for several hours," the FBI agent wrote in an affidavit filed in federal court Friday. ...

The East Coast suspect, who could get up to five years in federal prison if convicted of an interstate threat, is at the Orange County Jail in Orlando, Fla., The News says.