Gov. Gretchen Whitmer's job approval rating dropped 8 percentage points from February to May, according to a statewide survey of 600 registered voters reported by The Detroit News.

Contacted May 22-26, 50% of participants said they approved of Whitmer's performance while 44% said they disapproved.

The key question ahead of her reelection campaign in 2022 is whether the rating plateaus or continues to drop. 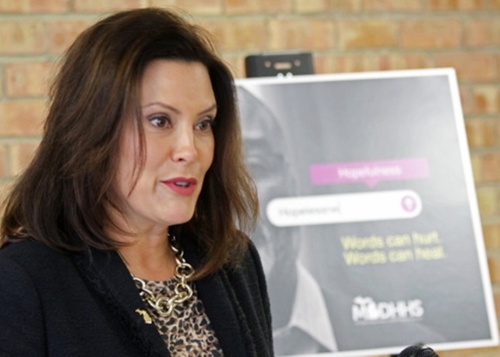 The governor has generated three flaps in recent months. (Photo: State of Michigan)

The poll by the Detroit Regional Chamber business group has an error margin of 4 percentage points in either direction.

Lansing pollster Richard Czuba, who oversaw both surveys, tells the paper that the Democratic governor could be in a strong position for re-election if she keeps at least 50-percent support.

Whitmer's approval rating had remained just under 60% in [his] polls in September, October and February after her administration gained national attention for its aggressive response to Covid-19.

In recent weeks, ... the governor has faced a string of public controversies.

Those flaps involved a $155,506 exit payment to her former health director, a three-day March flight to Florida on a private jet to see her elderly dad and an East Lansing bar meal with 12 friends and staffers at tables pushed together in violation of her health agency's epidemic order.