This is the latest column by a veteran Southeast Michigan police officer who’ll be identified after he retires in the next few years. He answers reader questions and provides perspective on police issues.
Send questions to anonymouscop@deadlinedetroit.com.  Follow him on
Twitter and Facebook.

My last column answered the question I’ve been asked the most lately: What crimes have gotten worse since the Covid-19 pandemic.

The first one is human trafficking, and I talked about it in Your Kids Are Being Trafficked in Their Bedrooms.

The other two crimes I mentioned were domestic violence and drug abuse. I’ll tackle the former here and the latter next month. Just a warning: My partner told me I sound very cop-ish. We agreed that it means I’m getting to the point and telling it as it is. 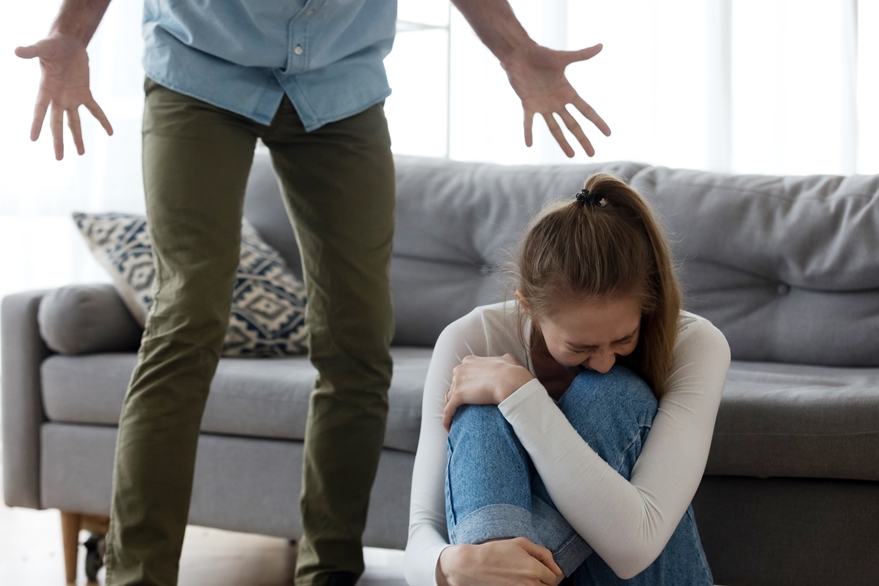 How can you call for help when you're home with the abuser all the time? (Staged photo: DepositPhotos)

We have all had to spend a lot of time at home this past year with the pandemic. That may be great if you are with the one you love, but what if you’re not?

What if you had to spend the past 15 months with the person who made your worst fears possibly come true every day? That’s what domestic violence can be like.

You are with the person who abuses you every day. Every day you’re walking on eggshells hoping you don’t provoke another punch, another kick, or another broken bone for you, your kids or your aging parents who are in your home.

With people having to stay at home more through the pandemic, my police department has seen a spike in domestic violence complaints and arrests. Research has generally found increases of various ranges including this article published in the American Journal of Emergency Medicine early on in the pandemic.

A New England Journal of Medicine Article opined that when calls to domestic-violence hotlines fell at the start of the pandemic, it was because victims “were unable to safely connect with services.” I’d agree with that. How can you call for help when you’re home with the abuser all the time?

Not Just in Marriages

My department makes an average of at least one arrest per day for domestic violence and takes just as many reports after the assault has occurred -- an increase of roughly one-third from pre-pandemic incidents.

Domestic violence isn’t just a serious assault by a husband on his wife. Legally it’s any assaultive behavior that occurs between spouses, ex-spouses, or people who are in, or have been in a dating relationship, have had a child together, or people who are living or have lived in the same residence.

If officers are called to a scene of “a domestic,” as we call it, they interview everyone present to establish what likely happened and who was responsible. Sometimes we have to ask the children what happened, and that is always very sad.

It is true we arrest the male half of a relationship the majority of the time.  We always get accused of only arresting the male regardless of what happened. Usually this comes from the mouth of the guy we just arrested but we arrest the female as the responsible one in about 25% of the cases.

Yes, there is such a thing as parental discipline, which is just common sense. Whipping your son and wife 30 times each with a metal coat hanger is not. Yes, I arrested that guy, and I can still remember every bleeding welt I saw on his family members more than 20 years later.

Probable Cause? Do not pass 'go'

Every domestic violence arrest is not an extreme assault incident. It can be when one person shoved another. You are still spending a night in jail if that’s what you did.

State law mandates that if probable cause exists then a person should be arrested and stay overnight in jail to separate the two individuals. You might feel that is excessive but we the police don’t really care about that.

By arresting someone we are solving a problem for the night. The situation can’t escalate and we won’t be called back to that house again that night, at least to see worse injuries inflicted on anyone – or worse.

Sometimes the victim will be angry with us that we are arresting the other party. They just wanted us to talk to him or something. Nope. If an assault occurred, someone is going to jail.

If you don’t like our service, then don’t call us and work out your own problems.

Domestic violence calls are one of the most dangerous calls an officer responds to. Those at the scene usually know or figure out we are coming, and there is a likelihood someone is going to jail. When we get there, at least one person is almost always intoxicated, and there is almost certainly a firearm in the house.

How to help victims leave

Cops are part of this conversation all the time. I’ve had it with new cops, neighbors, even friends of victims.

Why would someone live like this? Why don’t they leave?

There are a lot of reasons I’ve heard from victims:

There is help out there if you need it or someone you know needs it. No one should live in fear.

A fantastic organization in Oakland County is HAVEN.

In Wayne County a great organization to get help is First Step.