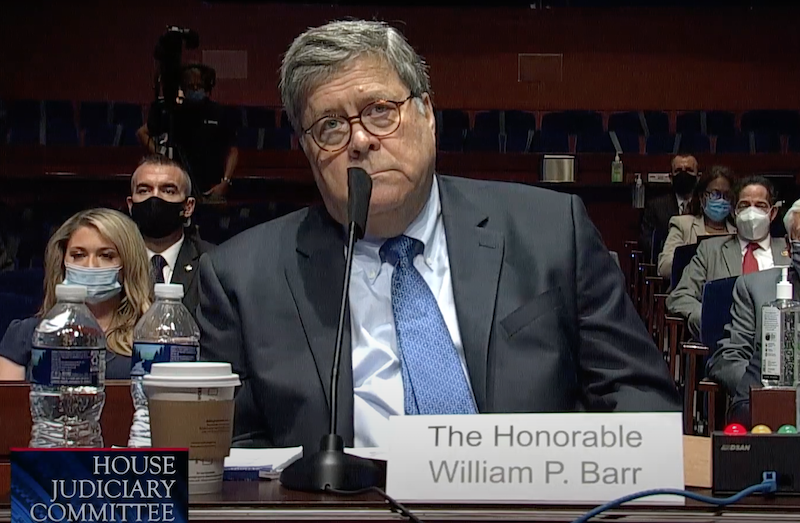 Former Attorney General William Barr says he pushed back against President Donald Trump's claims about voter fraud in Detroit, saying there was nothing there.

In an interview with ABC's Jonathan Karl that was published Sunday in The Atlantic, Barr says the Justice Department conducted no formal investigations of voter fraud. But he did ask then-U.S. Attorney Matthew Schneider in Detroit about Trump's claims that mysterious “ballot dumps” in Detroit tipped the vote in favor of Biden.

He also told Trump the campaign to convince the public of voter fraud was a "clown show, adding: "If there was evidence of fraud, I had no motive to suppress it. But my suspicion all the way along was that there was nothing there. It was all bullshit."

As proof of fraud, Trump’s allies had pointed to videos showing boxes filled with ballots arriving at the TCF Center, in Detroit, to be counted after the 8 p.m. deadline for votes to be cast. But Barr quickly found that there was a logical explanation. It had to do with how the 662 precincts in Wayne County, home to Detroit, tabulate their votes. “In every other county, they count the ballots at the precinct, but in Wayne County, they bring them into one central counting place. So the boxes are coming in all night. The fact that boxes are coming in—well, that’s what they do.”

Barr also met with Trump, his Chief of Staff Mark Meadows and others, and Trump ranted about fraud, according to people who described the meeting to Karl. Trump was also outraged that on Dec. 1 Barr told the Associated Press there was no evidence of widespread fraud.

Barr’s AP interview was dominating every cable news channel except the one Trump was watching. The television in the room was tuned to the right-wing, pro-Trump network One America News, which was broadcasting a committee hearing of the Michigan legislature. The hearing featured disproven allegations of massive election fraud, including the testimony of a woman named Melissa Carone, who had worked at the counting location in Detroit and told the committee, “Everything that happened at the TCF Center was fraud. Every single thing.” The next day, Carone would testify again, next to Rudy Giuliani, during which time she slurred her words and appeared to be drunk. (Carone later denied that she had been drunk.)

“They saw the boxes going in!” Trump yelled, referring to the stories about boxes of illegal ballots being counted.

“You know, Mr. President, there are 662 precincts in Wayne County." Trump seemed taken aback that he knew the exact number. “It’s the only county with all the boxes going to a central place, and you actually did better there this time around than you did last time. You keep on saying that the Department of Justice is not looking at this stuff, and we are looking at it in a responsible way. But your people keep on shoveling this shit out.”

As Trump ranted about other examples of fraud, Meadows continued to sit silently with his arms crossed, his posture suggesting that he also was upset by what Barr had done.