Mike Duggan, media critic: 'You ought to fairly balance' coverage of Ilitch family

Detroit's mayor has unsolicited advice for local journalists: Show the Ilitch family "some sense of fairness."

Mike Duggan dropped that unusual suggestion Monday while talking about state tax credits for seven residential projects, as JC Reindl of the Free Press recounts in his second and third paragraphs:

He also chided news reporters for being too pessimistic in their past coverage of the Ilitches and failing to give them credit for recent progress in building affordable housing.

"I hope the media, in some sense of fairness, will point out that one of the major winners here is the Ilitch organization," the mayor said, later adding in response to a question: "It seems like there is a whole lot more coverage about what they haven't done. I just think you ought to fairly balance it with what they have done — and they've done a lot." 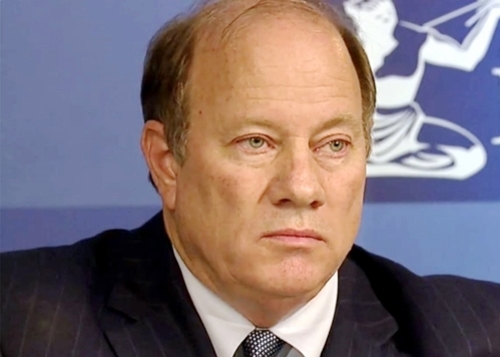 Mike Duggan: "There is a whole lot more coverage about what they haven't done." (Photo: Fox 2)

Among the planned work is a Henry Street project in the Cass Corridor that the Ilitches' Olympic Development will renovate with a nonprofit partner.

The project, across the street from LCA, will rehab a block of seven 1920s-era buildings to create 170 residences of which 84 would be reserved as affordable housing. The 45 or so existing tenants will get to stay ... at rents similar to what they currently pay, which is about $300 to $440 per month with utilities. ...

"And I'm quite certain that none of your viewers and readers would know that by the stories that have been done."