Two Michigan Democrats who work where Carl Levin did for 36 years pay tribute to the friend and inspiration who died Friday at 87.

"Today's Congress would do well to follow his example of common sense problem-solving," Sen. Gary Peters says in a statement. The second-term senator succeeded Levin in 2015.

Sen. Debbie Stabenow, now in her fourth term, says: "Michigan was so fortunate to have him fighting for us."

Here's what each posts at their Senate websites: 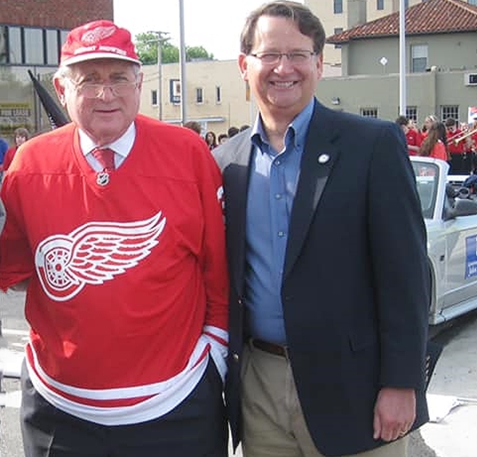 Gary Peters on Thursday night posted this memento from Detroit's Stanley Cup championship parade in June 2008, when he was a U.S. House candidate posing with Michigan's senior senator.

Senator Levin was one of the finest leaders to have ever served the State of Michigan and our country.

When I first began serving in Congress, I would often seek Senator Levin’s advice. His guidance was especially important to me as I succeeded him in the United States Senate. He was not only a mentor – he was a personal friend, who I looked up to as an extraordinary public servant. Senator Levin would always extend his hand to get things done for the betterment of our country – and today’s Congress would do well to follow his example of common sense problem-solving.

As chairman of the Senate Armed Services Committee, Senator Levin focused on ensuring our military was equipped to address growing threats. As chair of the Permanent Subcommittee on Investigations, he held those in positions of authority accountable – especially those responsible for the Wall Street collapse and the ensuing economic recession.

And – at his core – Senator Levin was a Michigan man, through and through. From his days on the Detroit City Council to the halls of the United States Senate, Senator Levin always had the well-being of Michiganders on his mind. He was a leader of unmatched character, principled leadership and integrity who will be remembered for his devotion to his family, our state and our country — and whose incredible impact was equaled by his humility.

Colleen and I extend our deepest condolences to his loving wife Barbara, his daughters Kate, Laura, and Erica, his brother Sandy and to the entire Levin family.

Senator Carl Levin was a champion for truth and justice and a tireless advocate for the people of Michigan. He always believed that our government could be a force for good, and he spent his career showing all of us how it's done.

Senator Levin was also my friend, and it was truly an honor to represent Michigan alongside him for 14 of the 36 years that he served in the Senate. Michigan was so fortunate to have him fighting for us.

My heart goes out to his beloved Barbara, his brother and best friend Sandy, his nephew Andy, his wonderful daughters and all of his family.