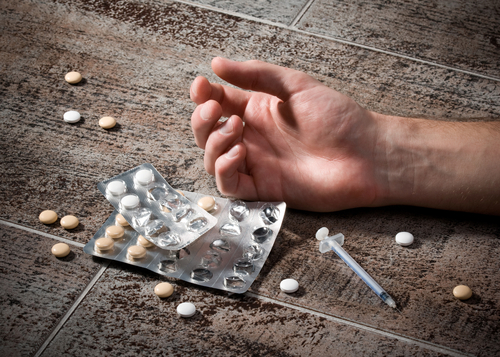 This is the latest column by a veteran Southeast Michigan police officer who’ll be identified after he retires in a few years. He answers reader questions and provides perspective on police issues.

By The Anonymous Cop

Like human trafficking and domestic violence as I described in my last columns, my department has dealt with an increase in drug overdoses since the beginning of the COVID-19 pandemic.

National research has shown this is a national problem.

Sure, a lot of us started drinking more during the stay-at-home orders of the pandemic. No, it’s not the healthiest activity but left unchecked and to our own devices we are tempted to overindulge. Was it the stress of isolation? The lack of social interaction to check our behavior? Perhaps.

No one consciously sets out or decides to be a drug addict. It’s not a great lifestyle. You eventually lose your job, your friends, your home. Anything that causes you to steal from your grandmother is pretty overpowering.

I’ve seen a lot of reasons why people become addicted. From my personal observations through interviews and reading case files, opioid addiction often begins with an injury and prescription medication for  pain relief. Your tolerance gets built up, and then your need more for stronger drugs.

Eventually you can’t acquire prescriptions – at least from reputable doctors – so you turn to heroin. It’s cheaper anyway.

The other track I’ve often seen toward such addiction is usually self-medication for mental illness. The users abuse drugs to ease anxiety, depression, bi-polar issues, even schizophrenia. They’re looking for something to silence the voices in their heads.

Addiction is hard enough to manage in a regular world. Imagine what it’s like with the same influences that cause you to have a second drink or eat the whole pint of ice cream with the added stress of the pandemic. With more social isolation, there is no one there to put a check on your behavior, to hold you accountable.

Doctor appointments were nearly impossible to get. Any therapy was over video chat and after that hour was up you were instantly back in your living room all alone. People had job layoffs and money issues. Kids were home all of the time. That’s enough to make an addict relapse or start doing more.

That “more” can be prescription pills or moving on to heroin. Both can have deadly results.

My department averages three overdoses a week that survive, and another one or two that are fatal, and I’ve talked to plenty of colleagues around the region who are experiencing the same.

Fatal overdoses will come in waves, and that’s when you know some bad heroin came on the market. The deaths are the result of too much fentanyl in the mix with the heroin. Often times there is no heroin at all and the user is just sold pure fentanyl.

By the way, there is a myth that you can’t overdose by snorting heroin, only injecting it. That myth gets a lot of people killed. I see addicts die all the time who have snorted the stuff.

I have always wondered if addicts knew their overdose was coming. I’ve seen addicts collapse with needles in their arms with the heroin half injected. It was almost instant death.

During the pandemic I responded to a fatal overdose where the victim had collapsed on his bed while texting. I could read his conversation on his phone. The last thing he typed was “Call 911. I overdosed.” But it was still in the message box. He never hit send.

“Are you still there?” and “Did you fall asleep?” were the only messages sent back to him.

He never got to ask for help.

During the pandemic, a lot of people were alone, which is the most dangerous time to abuse drugs. Had anyone been with the guy I described above? They could have called for help.

Sometimes we get those calls, and we can save the person. All our officers carry NARCAN on them. Literally in their pockets. NARCAN is a drug that counteracts an opioid overdose. We carry it because we administer it so often and in case one of us is exposed to an accidental dose of fentanyl. It works but sometimes we have to administer several doses to bring an overdose back around.

There is a program that can help reduce the growing addictions: Hope Not Handcuffs.

Anyone with an addiction can walk into a participating police station and ask for help.  The department calls a volunteer who comes in finds immediate placement. It doesn’t matter if you have insurance.

Also, even if you have minor arrest warrants, the police will let it pass so that you can get treatment. The program has worked very well for many that I have observed.

As we possibly start to come out of the pandemic, maybe we can also start to break the cycle of addiction as well.

Please keep sending your questions and I will answer them as honestly as I can. It’s anonymouscop@deadlinedetroit.com

The Pandemic Made Domestic Violence Worse

Your Kids Are Being Trafficked in Their Bedrooms

How Has the Black Lives Matter Movement Affected Policing?

Why Do Cops Kill Dogs?

Capitol Police Were Right Not to Shoot During Insurrection

Join me: It's a Great Job. Seriously.

Asking Us For Mental Health Services Daily, Even Hourly, Is Wrong

Candid Answers for Your Police Questions

A Reader Asks Why We Shoot to Kill

Why I Write This Column