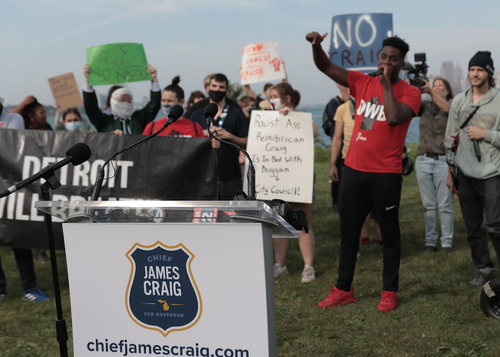 Former Detroit Police Chief James Craig continues to spread the blame for protesters successfully interferring with his announcement Tuesday to run for governor. First he accused the protestors of being paid off and the Michigan Department of Natural Resources of doing nothing to protect his event on Belle Isle, which is a state park.

On Tuesday night he went a step further by suggesting on Tucker Carlson's show on Fox News that Gov. Gretchen Whitmer had some role in preventing state law enforcement from responding to protesters, the Detroit Free Press reports. He suggested she was in cahoots with Michigan State Police and the DNR.

"So we pulled a permit," he told Carlson. "We wanted to do this in a state park. Belle Isle, a state park. We notified the local law enforcement agency who assured us, assured my staff that we know about the protesters, we will be there. Guess what Tucker: no show. And when they did show, it was, 'well, we don't know what to do,' basically and they left. Left."

Republican gubernatorial candidate James Craig has come to a strange conclusion as he seeks to make sense of his badly bungled Tuesday campaign rollout: The protesters who cut him short were paid off.

The former Detroit police chief made the assertion during a hastily assembled backup event at a nearby building owned by Christos Moisides, where the activists were not allowed.

Earlier, demonstrators with Detroit Will Breathe, having arrived at Craig's formal campaign announcement on Belle Isle in equal or greater numbers than his supporters, forced his swift departure by crowding him at the podium with shouts and an air horn.

There appeared to be no police present at the event, for which Craig has blamed the state DNR, the park's operator. The DNR says the Craig campaign understood the department wouldn't provide security for the event and agreed to handle it alone, but a day earlier a department representative did say that, though there would be no crowd control, “our staff knows the rules and they will not be allowed on your reservation site,” in reference to Detroit Will Breathe.

The grassroots organization staged near-nightly demonstrations following the killing of George Floyd last summer, clashing with police on a handful of occasions. Craig and media dealt with them regularly, so the assertion that they sought to stymie his candidacy for financial gain raised eyebrows.

One reporter, Russ McNamara of WDET, asked Craig about it following his speech and received a response was in line with Craig's gut instinct-over-evidence approach to some aspects of law enforcement.

Here's how it went:

Craig went on to repeat that he doesn't have hard evidence, but that last summer's demonstrations "were coordinated efforts to undermine local governments across the country." A few questions later, he talked about "following the science" in responding to Covid-19.

For their part, Detroit Will Breathe says "The only person there seeking to get paid for their politics was Craig."

"The insinuation that someone would only defend against systemic violence if they were paid is ridiculous," organizer Brian Silverstein said on behalf of the organization. "Craig is a pillar of state violence — we don't need to be paid to oppose someone whose entire platform is violence against protestors and the terrorization of the blackest city in the nation."