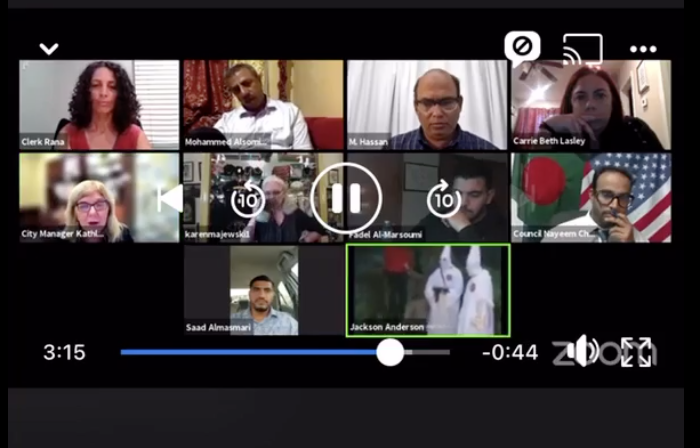 The prank video started with Klansmen lynching a Black man.

Some Hamtramck City Council members appeared appalled while others looked confused Tuesday night when someone hacked -- aka "Zoombombed" -- their virtual meeting on Facebook and inserted a nasty video.

The video, which lasted about 27 seconds, began with with men in KKK outfits lynching a Black man, followed by a woman and man having sex, accompanied by graphic music that included the repeated use of the N-word.

The meeting was briefly disrupted and resumed, with Hamtramck Mayor Karen Majewski issuing an apology to viewers.

"Apologies to everybody," she said. "We got Zoombombed and had to take a little break there and restart. And now we're back in."

Zoombombing, which often involves inserting an outrageous video into a virtual Zoom meeting, became a particularly popular prank during the pandemic.

"We have been Zoombombed in a Zoning meeting and another Council meeting before. I am confident the city will investigate. I am less confident that we will determine who it was. It's difficult to both allow the public and to keep out those with poor intentions. This attack, however, was coordinated with at least two participants (in the Zoom meeting) and maybe more, which is new for us."

The mayor and other councilmembers did not immediately respond to emails from Deadline Detroit asking for comment early Wednesday morning.

Because of the graphic and offensive nature of the video, some of the images in the lower right corner were blurred and certain words were censored.