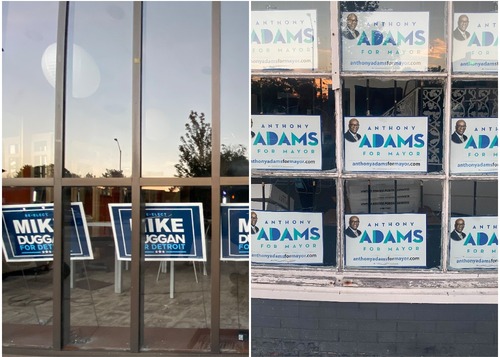 Detroit Mayor Mike Duggan won't debate opponent Anthony Adams as he seeks re-election this November, a pivot from the past two campaign cycles in which he squared off against stronger challengers.

“Adams’ campaign has been 100% hate and divisiveness, and I’m not going to give a platform to that kind of hate,” Duggan told WDET's Eli Newman in a Wednesday interview.

Adams hit back in an interview with Deadline Detroit, calling the assertion "a Trump tactic."

"I'm talking about things impacting Detroiters but he views that as hate speech because he’s thin skinned and he’s a coward," he said, going on to rattle off more than a dozen things he "hates" about Duggan's Detroit, including the overtaxation of homeowners and the loss of tens of thousands of Black residents.

Adams, who served as deputy mayor under Kwame Kilpatrick, lost badly to Duggan in the primary, pulling 10% of the vote to Duggan's 72% in a nine-way race. Between January and late July, he raised just $160,575 to Duggan's $1.1 million.

"A debate is of no benefit to Mike Duggan," said political analyst Bill Ballenger. "If you’re trailing in the polls as badly as Adams ... and have no money and can’t advertise, (Duggan's thinking), 'Why should I give him free advertising?'"

When he initially sought the mayorship in 2013, Duggan participated in three debates with the late Wayne County Sheriff Benny Napoleon. In 2017, he agreed to only one with Coleman Young Jr., who was a far more visible candidate than Adams.

A debate likely would not alter the outcome of the race, but Ballenger said Duggan's spurning one cheats the public.

"If Duggan is this great a mayor, why shouldn’t a challenger have a chance to counter his vision for Detroit?" he said. "When it comes to the public, the more information the better. Let them make up their mind. It shouldn’t be up to the incumbent to dictate that he's not even going to let his opponent be heard."

The Duggan campaign did not immediately respond to requests for comment.