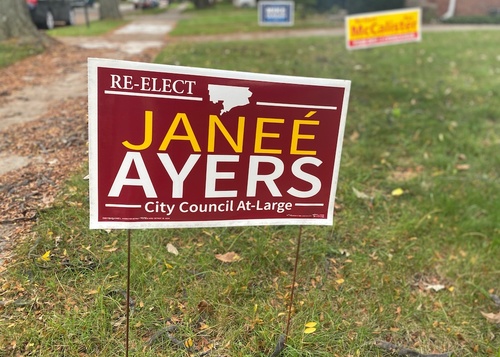 The councilwoman appears to be hiding in plain sight as she seeks re-election against the backdrop of a federal corruption probe. (Photo: Violet Ikonomova)

Last Tuesday was busy for Nicole Small. With three weeks until Detroit’s City Council elections, the at-large candidate was crisscrossing the city, talking to dozens of voters at three senior buildings before a night of back-to-back community meetings. On Sunday, she’d hit the church circuit, just as she had the several Sundays before.

Things had been quieter for her opponent, Councilmember Janeé Ayers. The lone incumbent in the four-way citywide race for two seats, the councilwoman had been largely absent from her main job of legislating. After an August FBI raid on her home and office potentially connected to the towing industry, she failed to attend Monday and Tuesday council sessions as a years-in-the-making ordinance to curb predatory towing practices was discussed and voted on, providing no explanation for her lack of attendance.

She'd been even less present on the campaign front, making no known public appearances and failing to participate in a Sunday Detroit News story on her race.

“Ayers' campaign said it would contact The Detroit News about scheduling an interview with Ayers but never did, and it did not return multiple subsequent requests,” the paper wrote.

With her re-election in jeopardy amid a federal corruption probe involving her and her chief of staff, the previously accessible council veteran of six years appears to have pivoted to a strategy of hiding in plain sight: visible enough to have a shot at winning, but at a far enough remove to stay silent on the scandal that dogs her.

“She’s doing a rope-a-dope,” said political consultant Adolph Mongo, who four years ago managed the mayoral campaign of Ayers opponent Coleman Young, Jr. “She’s leaning against the ropes, she’s getting some punches but she’s not punching back.

“Listen, an incumbent is hard to beat … (but) if you go into hiding, people will think, ‘What has she got to hide?’”

Ayers' campaign and council office did not respond to requests for comment.

The former hospitality worker and union negotiator was seen as a shoo-in for re-election after her first-place finish in the Aug. 3 primary, earning 31 percent of the vote. But since the raids on her home and office, she’s slipped to third behind Coleman Young Jr. and Mary Waters, according to at least one poll. Small was trailing in last place.

Ayers has been unwilling to discuss the investigation or even say whether she’s retained a lawyer. Her council colleague, Scott Benson of District 3, also under a cloud, has, by contrast, proclaimed his innocence and hired a high-powered attorney.

She's avoided questions in part by avoiding the public. Ayers is not known to have participated in a single candidate forum since late August, according to several nonprofit groups that host them. And she’s even limited engagement with constituents by ceasing her monthly “coffee and conversation” events.

Even before the raid, Ayers would not answer basic questions about her candidacy, and was the only candidate of 21 in the council primary who did not complete a survey from Deadline Detroit.

The tactic, Mongo contends, contributes to her electability problem.

“If I was running her campaign, I’d have her out there campaigning and doing what she needs to do,” he said. “Bottom line is … people wanna know, people like her.” 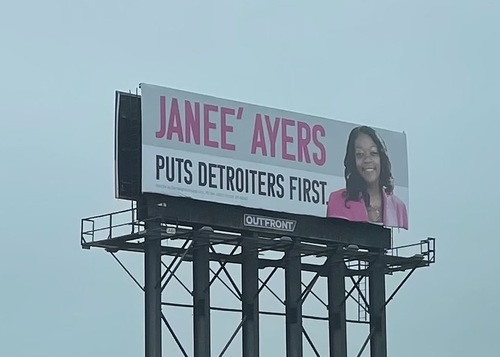 But despite her physical absence, Ayers’ name and image are omnipresent. Billboards display her face along the city’s highways and thoroughfares, telling passersby she “Puts Detroiters First” — a boost from a shadowy nonprofit led by current and former mayoral appointees.

A substantial war chest, built with donations from unions, corporate executives and developers, has helped her invest heavily in signage and advertising. Ayers had, as of the last campaign finance filing deadline, raised approximately $160,000 in direct contributions this year, by far the most of any candidate in the race. Waters and Small both have less than $15,000.

The councilwoman also maintains a long list of endorsements from unions, Democratic Party organizations, and the Detroit Regional Chamber. Even the Detroit Free Press’ editorial board, which chastised her silence on the probe as “a disservice to the constituents who elected her,” wrote that she and Young Jr. remained “best qualified to play constructive roles on council.”

The other candidates, by comparison, have been far more visible in person. Even Coleman Young, Jr., who Mongo says is likely “playing it safe” and avoiding possible mistakes, has campaigned and participated in some forums. He has, however, ignored multiple interview requests from Deadline Detroit and proven difficult to peg, declining to clarify his positions after his unsuccessful 2017 run to the left of Mayor Mike Duggan. 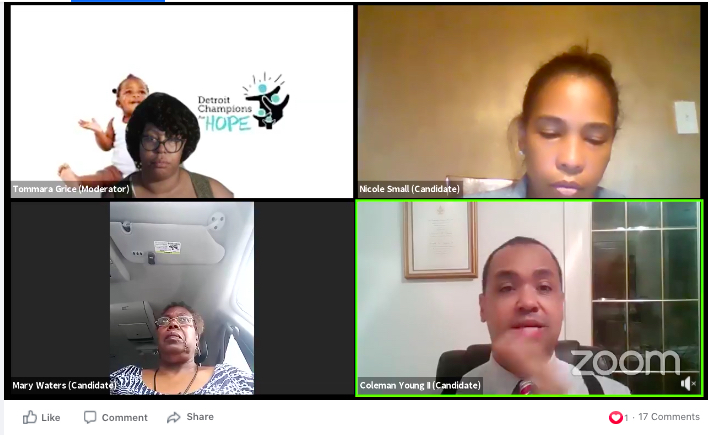 Waters, a former state representative, is seen campaigning in Facebook photos. Though she and her campaign manager did not respond to multiple requests to discuss their strategy, she has been answering for her troubles in media interviews. Past issues include a 2010 tax fraud conviction stemming from a separate bribery case in which she took a $6,000 Rolex watch and a recent discovery by the Free Press that she owes nearly $28,000 in property taxes on her Detroit home.

Small, a former charter commissioner who led an unsuccessful bid to add sweeping anti-poverty reforms to the city’s guiding document, says she’s campaigning vigorously as she seeks to overcome a lack of name recognition.

“The more exposure we all get, the more people will know I’m more prepared on the issues than some of my opponents,” she said.

The councilwoman has, conversely, maintained a presence on social media, where she seeks proxies to reach out to voters on her behalf.

“Election Day is coming up fast!” she wrote Oct. 10. “We have thousands of voters to talk to ... Help reelect Janeé Ayers by volunteering today.”