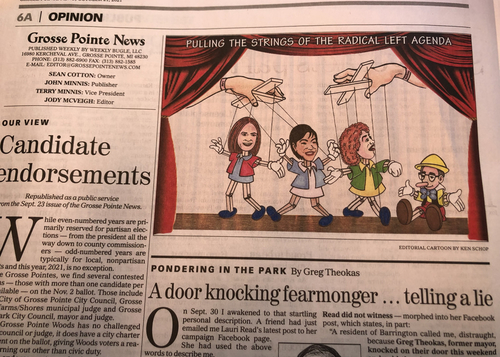 A cartoon identifies the "puppeteer" as Mary Rouleau, a local resident.

For years, even decades, subscribers to the Grosse Pointe News knew what to expect when they opened their paper on Thursday.

That is, community news, weddings, a crime-news roundup, and an opinion page that rarely made waves. Letters to the editor would praise the turnout for a fundraiser and thank the biggest donors; an editorial might make a reasoned argument for some public cause. You could read it in 10 minutes, if you lingered over Sports.

Today, the News still has features, weddings and crime news. But the editorial page is, to put it bluntly, off the chain. Sitting city council members are referred to as “the Know Nothings.” Editorial cartoons mock not just officeholders, but private citizens. And a single reporter, Brad Lindberg, appears to have been designated a journalistic hitman, writing lengthy, often confusing “analysis” pieces that target perceived opponents of the Cotton family’s interests, particularly in Grosse Pointe Park. 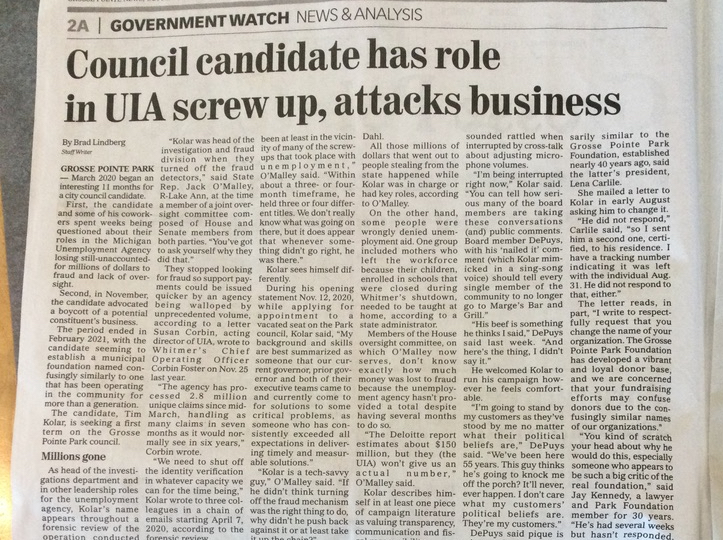 The subject of this lengthy attack piece said he was not contacted for comment (Photos: Nancy Derringer)

To cite but one example: A constituent of current Park council member (and News-endorsed mayoral candidate) Michele Hodges sent her an email, criticizing some positions she had taken. Lindberg, who has been deep into council email via FOIA requests, quoted part of the email, then identified the constituent as one of the employees fired by General Motors over the ignition switch-related fatalities scandal of 2014. There was a damning quote from GM CEO Mary Barra, scraped from a Reuters story. And then, just in case the message wasn't clear:

“Autoblog.com put the death toll as high as 74,” Lindberg concluded.

Once a Republican stronghold, Grosse Pointe Park, like the rest of the Pointes, like affluent suburbs elsewhere in the country, has grown more liberal in recent years. In the 2019 elections, this finally trickled down to the Park’s non-partisan city council, and a liberal majority settled in.

At the same time, over roughly the last decade, the wealthy and Republican-supporting Cotton family – Shery and David, and their sons Michael, Sean and Jon – began investing in Grosse Pointe Park. They set up a foundation to encourage young people to move to the city’s many rental units. They began buying businesses, investing in restaurants and retail. The Park’s commercial district developed an unmistakable sparkle, and what had been a quiet stretch of ho-hum blocks took on vitality and verve, with foot traffic and dining options.

But once the progressives had a council majority, they started asking questions about wealthy donors’ moves in the community, about land deals, as the Park spent public money to buy property in Detroit. (Many of these deals, it should be noted, were made under previous administrations, under a now-retired city manager and now-dead mayor.) They wondered why deep-pocketed residents, and their various philanthropic projects, were catered to, their projects delivered as faits accompli, while ordinary residents and taxpayers took a number.

In many ways, the disputes are similar to many Detroiters’ complaints about Dan Gilbert. His investments in the city are welcome, but, some say, the city is too quick to hand him and his fellow billionaires everything they want, while residents and neighborhoods are, by comparison, ignored.

Many residents don’t appreciate this argument. And the fighting this has kicked off is ferocious.

“The old guard is desperately clawing at whatever vestiges of power they have left,” said Park resident Colin McComb, who has worked for and supported the council’s progressives. “The Cottons want to do the things they want to do, and they don’t want the peons questioning them.” 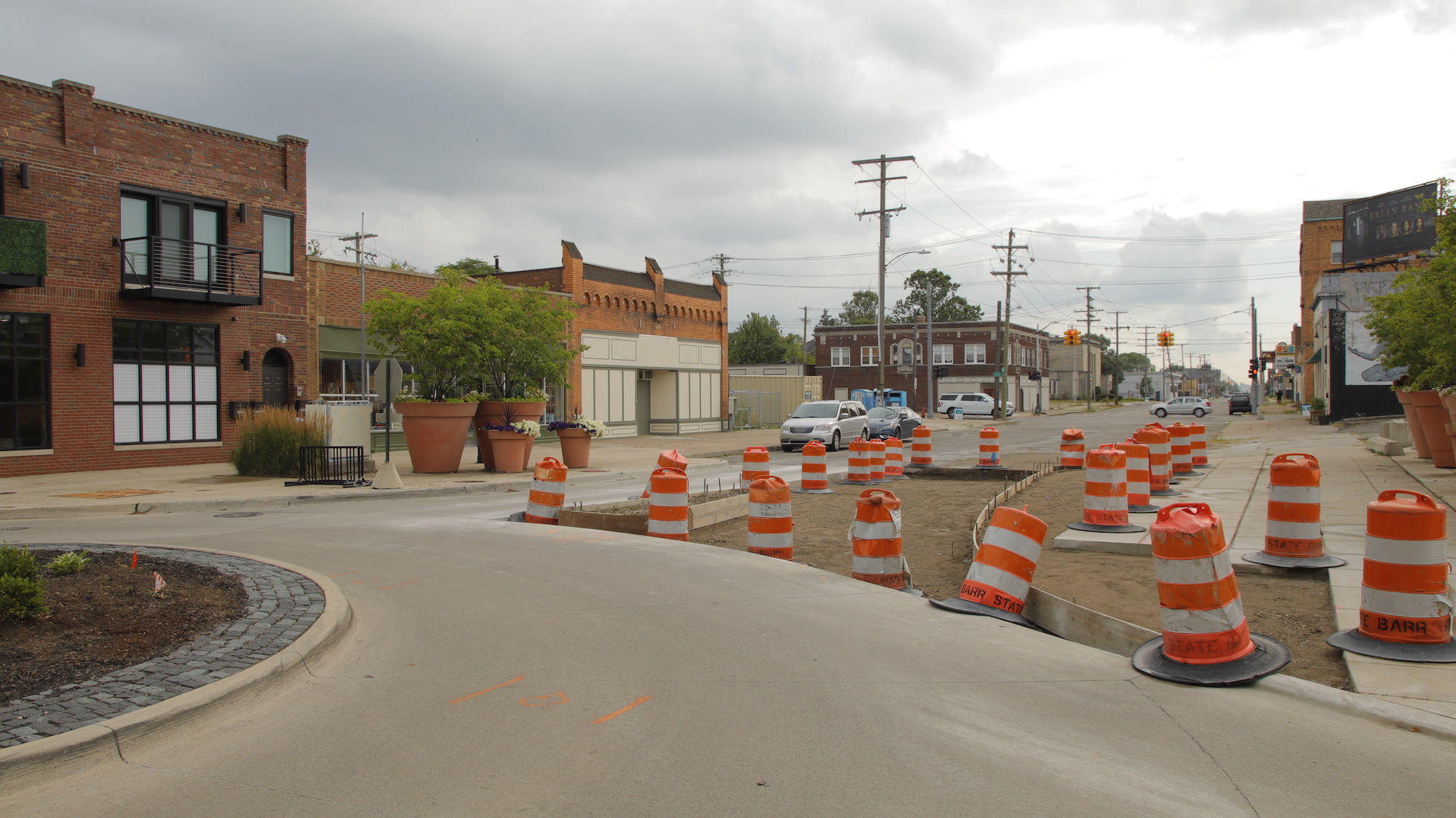 An early point of contention was over the intersection of Kercheval and Alter Road, at the city’s border with Detroit. At one point, the Cottons had proposed building an office building at the foot of Kercheval, which would require closing the street, and the city began a years-long cold war of closing and opening the thoroughfare into Detroit – first with snow, then sheds for a Saturday farmers’ market, then landscaping, finally settling on a roundabout.

The battle pitted Park liberals, who questioned why the city was effectively building a wall at the border with Detroit, against others who were simply grateful anyone was willing to invest there, and found questioning it rude and counterproductive. The fight attracted media attention, which slipped into an easy narrative of the rich white suburb walling out its poor Black neighbor; in 2014, even the Los Angeles Times filed a story about the barrier that “​separates the haves from have-nots.”

Fuel to the fire

But that and other conflicts were mostly skirmishes until December, when Cotton bought the paper, which was teetering on the brink of insolvency, from its former owner/publishers, John and Terry Minnis. The small staff was told they had to re-apply for their jobs, and one of those not retained was education reporter Mary Anne Brush, who had just covered a bruising school-board race, in which four conservatives ran as a slate (only two successfully), with rumors of dark-money funding from the Cottons. An activist owner seemed to be taking the reins.

Lindberg’s stories started not long after. One investigated whether Grosse Pointe South High School Principal Moussa Hamka had “liked” a tweet that asked, “Do you think Republican politicians are like the Nazis?” Another noted that the class president at the same school had given a graduation speech that asked for better treatment for minorities; did this indicate that critical race theory was being taught in Grosse Pointe schools?

Soon the focus shifted to the Park, where the municipal election coming Tuesday is like none in anyone’s memory, fiery and ugly. Six candidates are vying for three open council seats, and the mayor’s seat is also open, pitting Hodges against fellow council member Lauri Read. The candidates have split into two groups, of liberals and conservatives; one of the latter group’s campaign slogans is “Let’s get this council back on track!”

To say the races have stirred bad blood would be an understatement. Besides the name-calling, finger-pointing and insults from the paper, social media has been ablaze, a toxic stew of shit-talking and fake names, which led to an eye-rolling moment in which the editorial page ran Facebook comments from “Jack Pine” and “Carlos Spicyweiner” as letters to the editor, then noting, “To the best of our research, there are no residents with names matching a Mr. Pine or Mr. Spicyweiner.”

In which the Grosse Pointe News soberly notes it cannot confirm the identities of “Jack Pine” and “Carlos Spicyweiner”pic.twitter.com/9YZEpTpEE3

Meanwhile, the liberal camp uses Facebook as a news source. Lou Mleczko is a retired newspaper union official and Detroit News reporter. A 43-year resident of the Park, he’s taken it upon himself to cover city council meetings as a reporter, posting to a Park Facebook group.

“On issues that come up before the council, when they do stories, it’ll be basically parroting what the city manager or mayor has to say. Other criticism is either ignored or given short shrift,” said Mleczko, who has also been the target of editorial-page attacks. A long-time subscriber to the Grosse Pointe News, he recently failed to renew, because, he said, the paper has “thrown out any fairness or balance in their reporting. They have a right to their editorials, but when they turn the whole paper into an attack dog…It was never a great weekly, but at least you got a feeling about what was going on. I don’t see that anymore.”

Tim Kiska is another former Detroit journalist, now a professor at U-M Dearborn, who looks at the News more in sorrow than anger. A resident of Grosse Pointe Woods, he grew up in the Park, graduated from South, and has lived in one of the five Pointes for the best part of 50 years. He, too, has let his subscription expire, a decision he reached after a Lindberg skewering of Park resident Frank Joyce, who objected to the location of a wall behind a Park building, facing Detroit.

“It was quite clear they were out to make him look stupid,” said Kiska. “What’s the point of that?” Fairness – if only in a few respectful paragraphs explaining the other side – has gone out the window, he said.

The problem, one neutral observer notes, is the paper’s aggression, and the rhetoric of those it opposes, have lost what was once a fairly broad and diverse middle ground in Grosse Pointe. For years, Republicans here were for the most part moderate, and liberals likewise. When everyone came home to their leafy neighborhoods at the end of the day, they wanted peace, quiet and not to think about whether they should be boycotting a pizza restaurant because of the candidate signs in the front window.

“The paper is not properly airing both sides of the issue, and playing to the fringes,” this observer said. “That gets people mad on both sides, and it just escalates.” 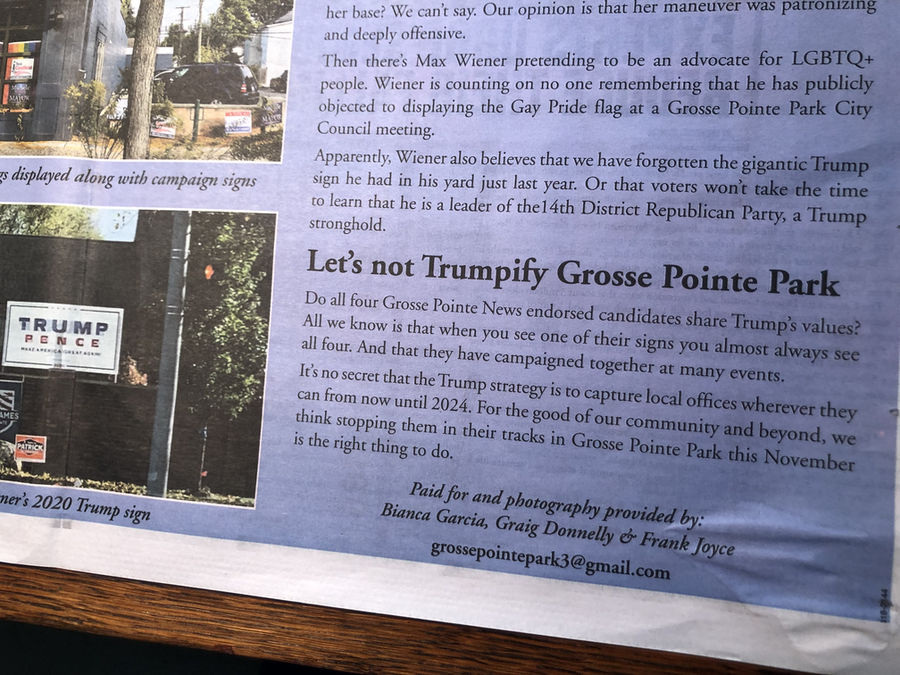 An ad by supporters of the Park council's liberal members, in another newspaper

This seems a good place to note that Deadline Detroit contacted Cotton, Minnis, Lindberg and others with interview requests, and received a response only from Lindberg, who said he didn’t have permission to speak. Even those inclined to support the Cottons asked to do so off the record; one said the family’s power in the Pointes was so formidable that they couldn’t risk even mild criticism of the paper’s transformation, while still lauding them for their investments in the community.

Local news sources are imperiled all over the world. The internet has destroyed journalism’s business model, and news sources large and small are close to the cliff’s edge. Rare is the lucky staff of the Washington Post, who found a sugar daddy in Jeff Bezos, willing to pump the paper with money but stay out of the editorial process. Others are being scooped up by hedge funds for further asset-stripping. In some ways, Pointers are lucky their paper survives. However, readers may not have anticipated having their past mined for disgrace after emailing a councilperson.

No matter what happens, the election will be over in just a couple of days. A reader of the Grosse Pointe News might wonder what’s next. Hodges speaks of “(a) path forward as simple as calling for a ‘reset.’ We all care about our community. The issues are on the table. Let’s move forward in a way we can all be proud of, together.”

Others, noting a budget crisis on the horizon in the public school system, believe that will be the next battle, and after the school-board race in 2020, will be at least as ugly.

One reason small-circulation weeklies serving smaller communities – the total population of all the Pointes is around 45,000 – tend to be tamer than their big-city counterparts is what you might call the Neighbor Factor. Attacks, fair or unfair, have consequences, not only in cancelled subscriptions. People know one another, connections stretch across income and city borders and into checkout lines and local businesses. It’s hard to know what becomes of a community where so many insults have been hurled, particularly by a media source.

To one resident, who asked not to be named, it’s pretty clear:

“This nastiness in the Park is going to taint us all.”