It's official: Mel Tucker has officially entered the pantheon of the most lavishly compensated college coaches in the country, and the answer to those ha-ha-gotcha questions of "who is the highest-paid public employee in your state" that sometimes come around on social media news feeds. 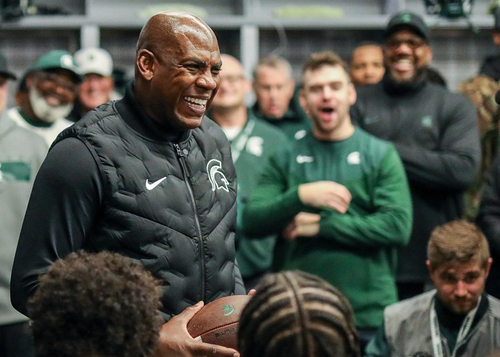 Michigan State University announced yesterday it had signed its football coach to a 10-year, $95-million deal that...let's let The Detroit News lay out the superlatives:

Michigan State confirmed the new contract is a 10-year deal worth $95 million. According to the school's release, Tucker's contract is valued at $9.5 million per year, including a $5.9 million base salary, $3.2 million in supplemental compensation for media and personal appearances, plus a $400,000 contingent annual bonus. The contract expires on Jan. 15, 2032.

... The new contract makes Tucker, 49, the highest-paid Black head coach in American sports, surpassing Stanford's David Shaw, who is making just more than $8.9 million per year. Mike Tomlin of the Pittsburgh Steelers is the highest-paid Black coach in the NFL at $8 million a year, while Doc Rivers of the Philadelphia 76ers earns the same in the NBA.

The raise was personally financed by two megarich alumni, Mat Ishbia (president and CEO of United Wholesale Mortgage) and Steve St. Andre (president of Shift Digital, which does digital marketing for automakers and dealers).

Tucker inked his new deal days after the Spartans lost to Ohio State, whose own head coach, Ryan Day, earns a mere $4.5 million base salary.