Lengel: Marlboro Man Kevin Rinke Wants to Be Michigan’s Next Governor. If Only He Had a Clue. 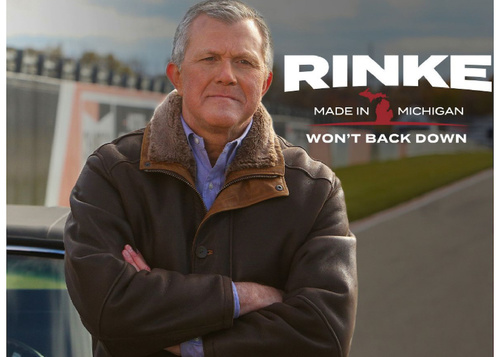 Bloomfield Township businessman Kevin Rinke, the GOP gubernatorial hopeful who likes to dress like the cowboy in the old Marlboro commercials, apparently has less sense than the horses in those ads.

On Tuesday, the macho-looking man whose campaign slogan is “Won’t Back Down” sent a mass email.

“We have been subjected to ENOUGH restrictions and endless mandates,” it read. “We need to get Michigan OPEN for BUSINESS. Sign the petition now to DEMAND Governor Whitmer reopen our state.”

You’d think a candidate for governor would keep up with current events. Does he have any clue as to what state he’s in, besides the one of confusion?

Gretchen Whitmer dropped Covid mandates and restrictions nearly a year ago. As of now, there are no governor-mandated restrictions. Some school districts and counties mandated masks and some concert and entertainment venues and businesses require vaccination cards or Covid tests. But those are decided at the county level, and the rest are calls made by private businesses – which a good Republican should respect.

For Rinke to rail against Whitmer, to ask people to sign a petition urging her to open up businesses, is just moronic – and frankly insulting to anyone’s intelligence. Perhaps the man who owned auto dealerships is used to hoodwinking people into buying whatever he’s selling.

Is this the guy we want leading our state? A guy who read the May 2021 Republican playbook and is running with it, unable to pivot and use common sense.

His email on Tuesday goes on:

"The longer we let Gretchen Whitmer and Big Government liberals push us around, the more they will try to take from us. That’s not a prediction. That’s a warning."

"Can Michigan count on you? Join me in this fight to open our state and get Michiganders back to work."

Sadly, Rinke is hoping the voters are as uninformed as him.

Is this the best and brightest of Michigan’s Republican party?

He’s not alone in drinking the Kool-Aid. Ex-Detroit Police Chief James Craig the other day came out in support of Canadian truckers blocking the Ambassador Bridge and hurting the Michigan and Canadian economies. He too has become a stooge for the Republican Party, though he still has more going for him than Rinke.

In an email last week, Rinke wrote: "Our current governor acts like a tyrant, not an elected leader."

In a video he distributed last week, he complains about vote fraud and critical race theory.

He goes on to say: “I’m Kevin Rinke, conservative businessman and outsider. But not a politician.’

Truth is the commercial should say; “I’m Kevin Rinke and I’m a walking political cliché. Vote for someone else who knows what the heck they're talking about.”