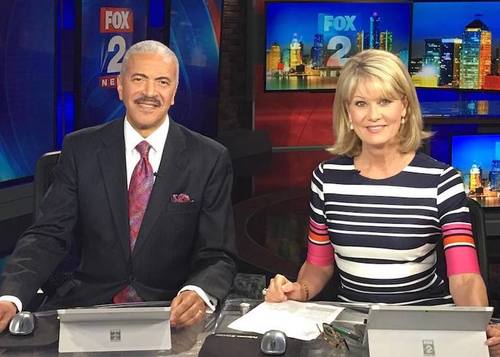 Fox 2 nightly news anchor duo Huel Perkins and Monica Gayle have announced they're retiring after decades at the station.

In what will be the beginning of likely a number of heartfelt goodbyes, the co-anchors announced they would "go out together" on March 25.

"Part of the reason I've made this decision is that I've lost people my age and I've said to myself I've got to live while I can and still be healthy enough to enjoy it," Perkins said, in a likely nod to the August death of political consultant Steve Hood.

But he doesn't begrudge the job, saying he's blessed to have been able to do what he loves. "They call this work and they pay me to do it — and I would have done it anyway."

Gayle echoed the sentiment: "It's flown by. It doesn't seem like 25 years. It just feels very right that we go out together as a team."

Flanked by sports anchor Dan Miller and meteorologist Rich Luterman, Gayle looked back on how the foursome met for head shots more than two decades ago. At the time, they all had young children. Now, those kids are grown and the anchors all need reading glasses.

Gayle previously told Deadline Detroit her decision was partly inspired by "soul searching" during the pandemic. "We want to make life count and we want to enjoy it," she said.

Rumors have circulated that Fox 2 veterans Roop Raj and Taryn Asher may be candidates to replace them.

The retirements leave WDIV's Devin Scillian as the Detroit market's most seasoned anchor.