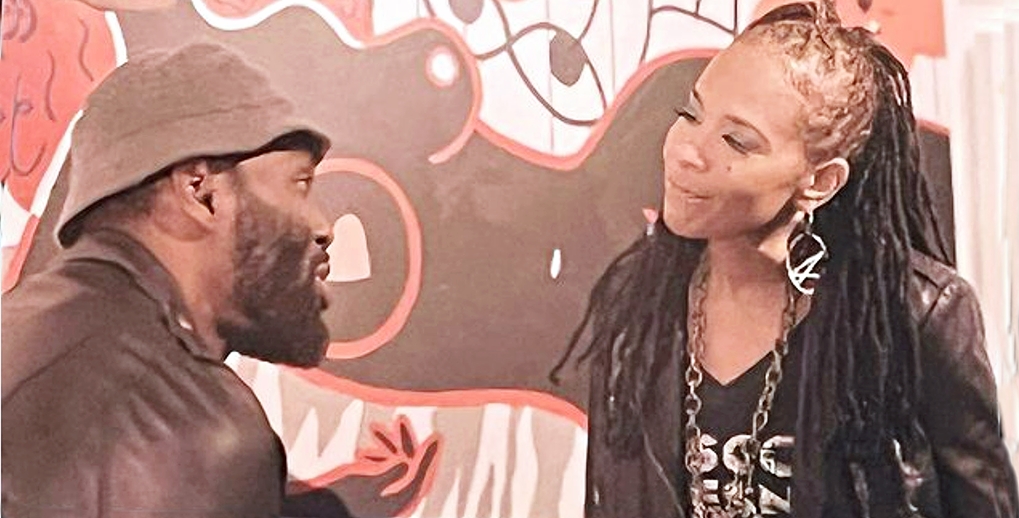 Tobias Truvillion and jessica care moore in a scene from the Detroit-made feature. See 15 more photos below.

A homegrown film-in-progress, "He Looked Like a Postcard," is a Detroit love story co-starring the woman behind its screenplay. Local writer-producer jessica care moore portrays a poet like herself.

She and director Qasim Bassir, also from Detroit, are editing and adding music to scenes shot locally last September and October. "We are still working hard ... to make something beautiful," moore says on Facebook. "Can't wait for you all to meet Serendipity and Motown," the lead characters. 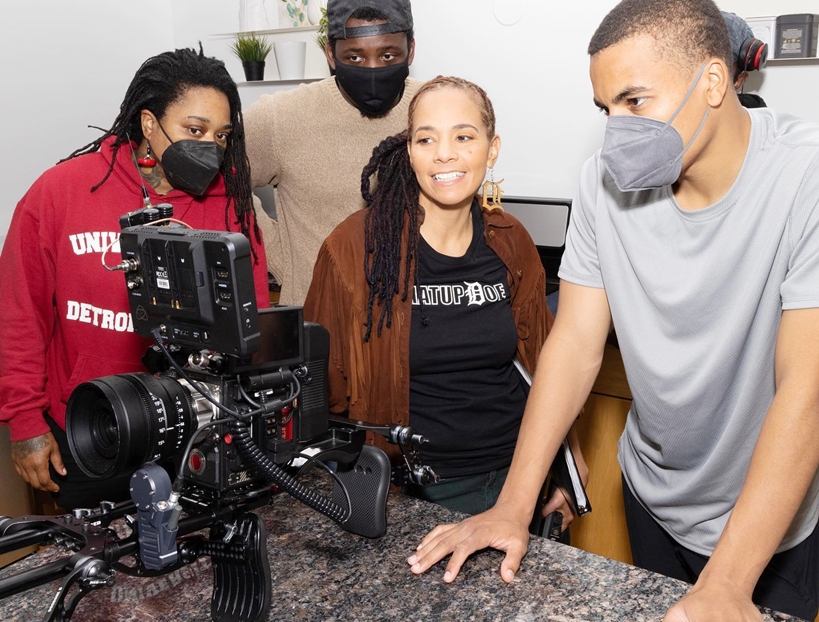 The urban romance is about a graffiti artist who found corporate success, played by Tobias Truvillion of New York, and his relationship with "a celebrated poet returning to Detroit with her 10-year-old son Idris to find peace, balance and inspiration in her city," as moore puts it. (She uses lower-case style for her name.)

The real-life writer, a Cody High graduate born and raised here, is a celebrated author-performer-producer who's raising a 15-year-old son (King Thomas Moore) in the Boston-Edison neighborhood and who returned to her roots after a splash in New York. She gained national attention by winning "It’s Showtime at the Apollo," a syndicated TV variety show (1987-2008), five times in a row.

"I wrote a self-love story," she posted last month.

"It's also a love story between a poet named Serendipity and a graffiti artist named Motown from the city, and about mothers pushing through the noise of the mainstream bullshit of what motherhood looks like, and what being a Black artist in the city looks like."

On social media last weekend, moore said: "I wrote the characters Motown and Serendipity many years ago. It took this pandemic to slow me down just enough to return to this script." 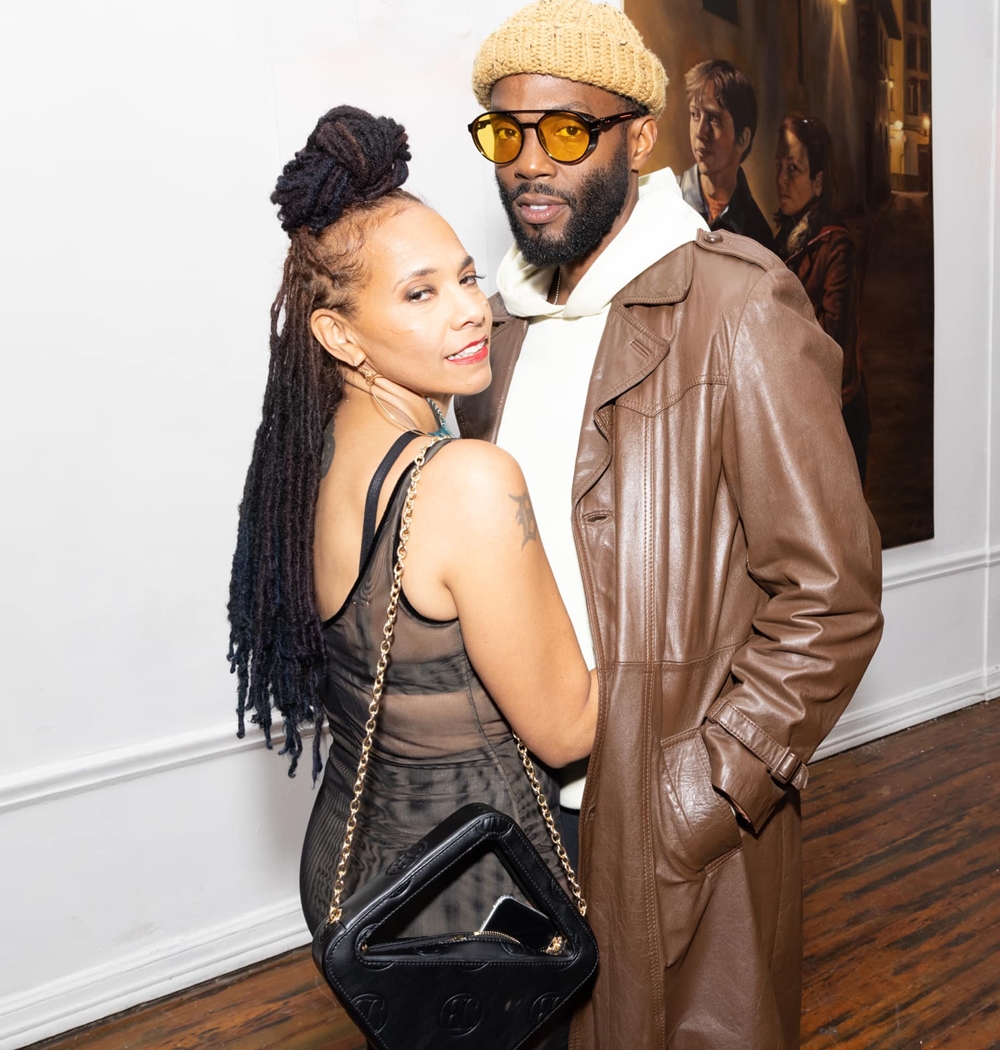 The co-stars at a gallery.

Playing Serendipity obviously isn't a reach for its alter-ego creator, though a skateboarding scene was new and scary. But this daring daughter of Detroit is no stranger to stretching skills and taking risks, so a stunt double isn't how she rolls. "Trying not to bust my ass," she says with a one-minute Dequindre Cut skate lesson clip.

Interior locations include Irwin House gallery on West Grand Boulevard, and Hamilton Gallery in Highland Park and The Kitchen restaurant in New Center.

There's no word yet on a release date, screenings or a distributor for the indie movie.

moore is executive producer and Samantha Basir, spouse of the director, is associate producer. ("So many badass women on the producer, design and production side," moore posts.)

Past achievements for moore include published poetry collections, a 2016 Kresge Arts in Detroit fellowship, awards from the DIA and NAACP, and appearances on Russell Simmons' HBO series "Def Poetry Jam." Turning a narrative into a movie is something new..

Diary of 'a love letter'

Reflective social media posts since last summer serve as a filmmaking diary, in effect. Below are portions of her public updates on this "huge leap for me." 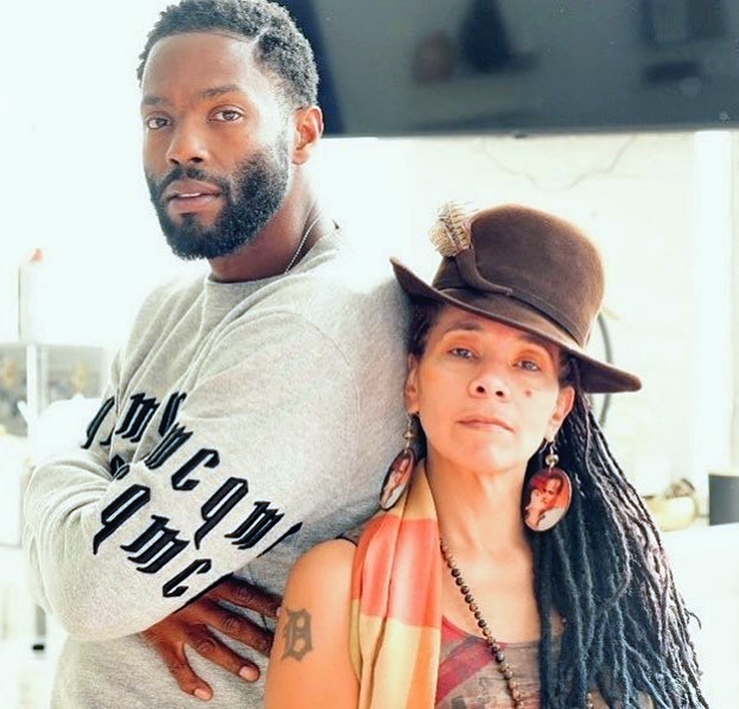 The performers strike a pose.

This is my first time writing and producing a film, and I am so humbled by the process. Learning about how investing works, but, most importantly understanding and knowing my worth. There is always a risk, but I never lose when I bet on myself.

This film is a love letter to artists, to working moms who make art, to painters, to writers, for women and for my city. We're making a love story in Detroit.

This is a huge leap for me as a writer. I am officially a screenwriter, and producer and this is just the beginning.

How this came to be is just divine order and I'm so grateful and humbled by this process of growth for me as an artist.

When Q [director Qasim Basir] met with me about my script, I was ready to just take notes. It took me a few minutes to realize he  wanted to direct it! 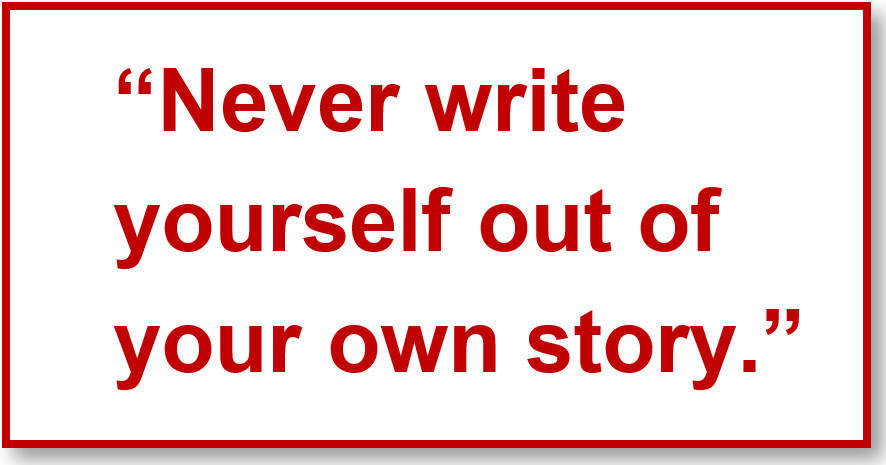 The next question he asked would force me to face some fears. "So you gonna  be in it?" I quickly said "No" and then rambled on about coaching someone else for the role of Serendipity. He let me have it.

We moved on and I basically couldn’t sleep for 24 hours.

I was writing myself out of my own story. I was doing what Hollywood might do to a black woman actor deep in her 40s. I was tripping. I called Q and asked him to talk to me straight: "Did you ask me if I wanted to do the role because you think I want to be in a movie or you think I can actually do the part?"

Q said: "You have to do the film. No one can tell this story better than you."

Never write yourself out of your own story.

Learning how to do something new is a very bold act when you are a grown-up. 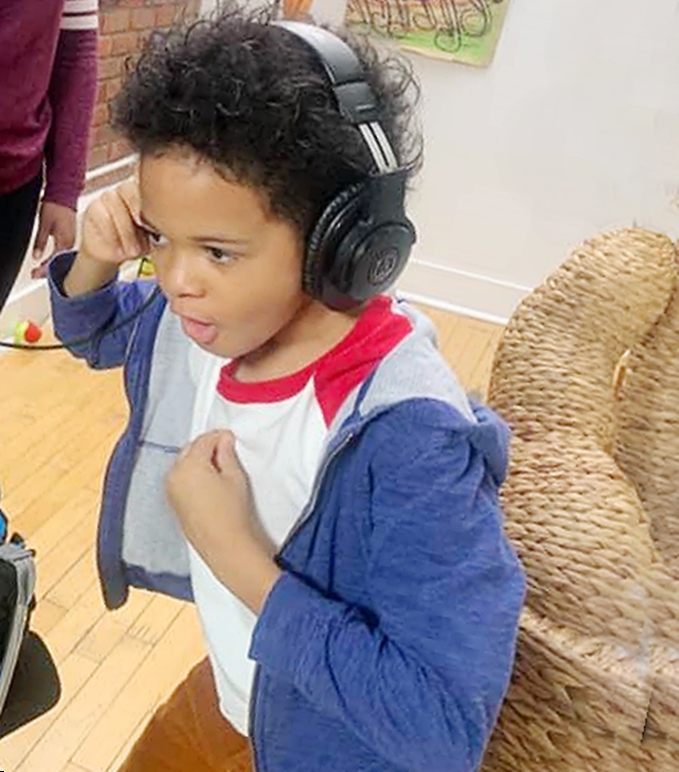 "Watching my nephew, Jaden Anthony Moore, become a little star is everything! He is so talented!" -- jessica care moore on the relative playing her son

I am enjoying and claiming this new experience in the film industry. I've been producing live arts events, concerts, conversations, multi-media theatrical performances for a very long time now. It was always an extension of my work, so I honestly never considered it a real skill. It was just how I existed, the way I carved out a necessary space for my voice and the voices of other artists.

So, I am loving this new hat of film producing and screenwriting. I am loving all the nuance, drama, patience, language and creativity that goes into making a film a reality.

I've been raising money with people who believe in my work as a poet, thinker, as a woman, and as a producer of art that speaks to the hearts of people often ignored and stepped over.

I am so grateful for the people who have invested in my work in a big way.

I wrote the first draft of my screenplay a decade ago. I knew film would eventually be a lane for me as a writer, but I also know how difficult it is for my filmmaking friends to get to the finish line. I have been producing and curating culture and theatrical and music productions for a few decades, but I am most well-known as a poet – and one connected unapologetically to the people, a Black arts movement daughter.

For many years I spoke, performed, inspired students on college campuses across the country and abroad. One of the leaders and thinkers that supported me along this journey was my brother Lasana Hotep. He made it possible for me to bring my Black Women Rock curriculum to Skyline College [in San Bruno, Calif.] and brought me to campus for keynotes wherever he was working.

Most importantly he was my very first executive producer on “He Looked Like a Postcard.” I was in San Francisco visiting family and he stopped by to see me and my son. I casually told him I was going to be shooting my first film. 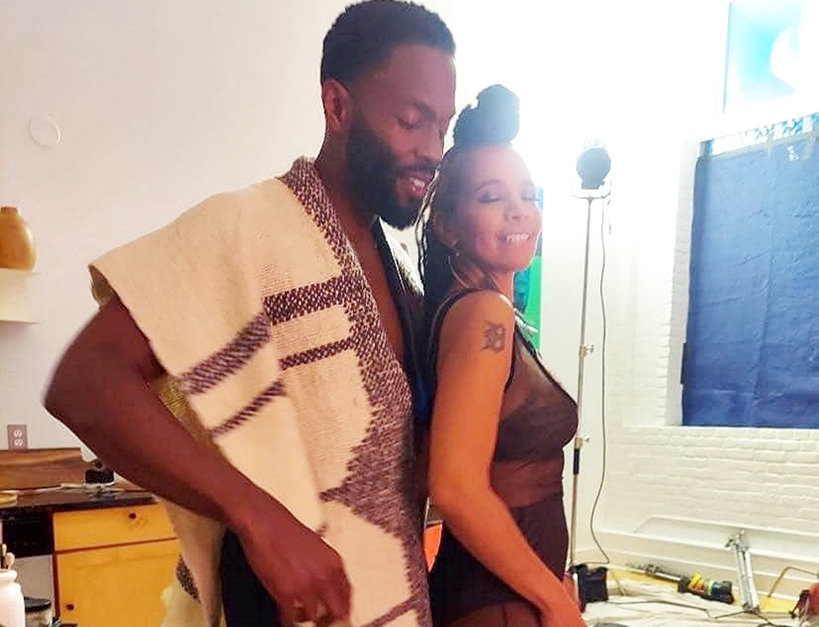 Truvillion is from Queens, N.Y., and moore grew up on Detroit's west side. (Photo: Rashida LaShawn)

His belief in me gave me the confidence to begin reaching out to people to come on board to be a part of something very beautiful and necessary.

This is not the only gushy story attached to this film. … I learned so much in this process, mostly that you never know who will show up for you.

My film was not funded by my rich friends. It was supported by a small group of incredible people from different spaces who loved my script or knew my worth as an artist.

Producing a feature film has been one of the most rewarding, difficult accomplishments of my artistic career. I love it.

Photos from the writer and crew: 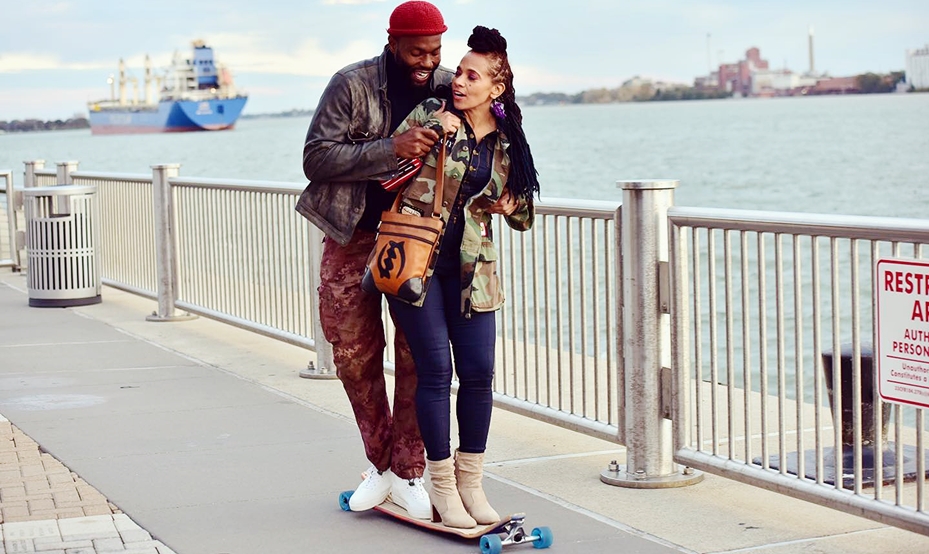 Truvillion and moore in a playful moment on RiverWalk. (Photo: Andre Terrell) 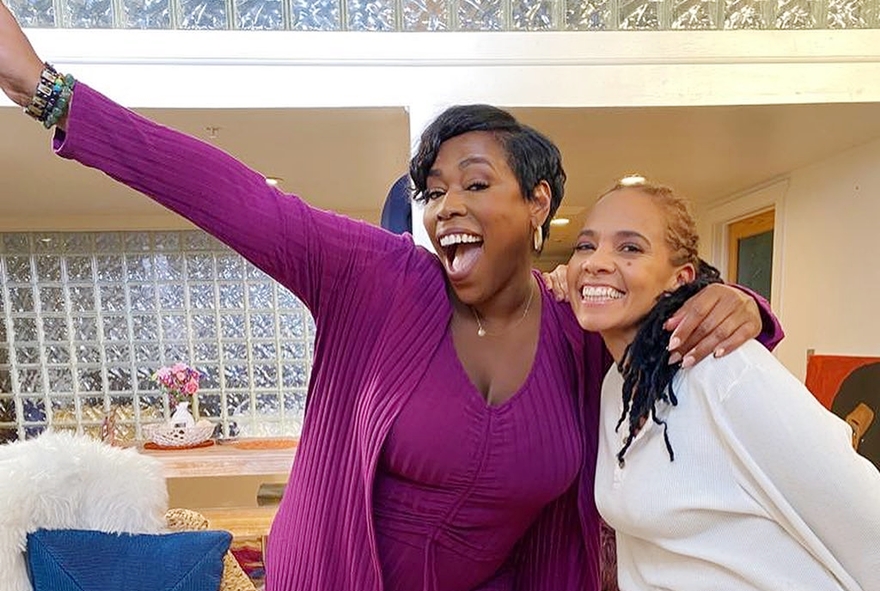 Behind the scene on Congress Street downtown. (Photo: Rachel Simone) 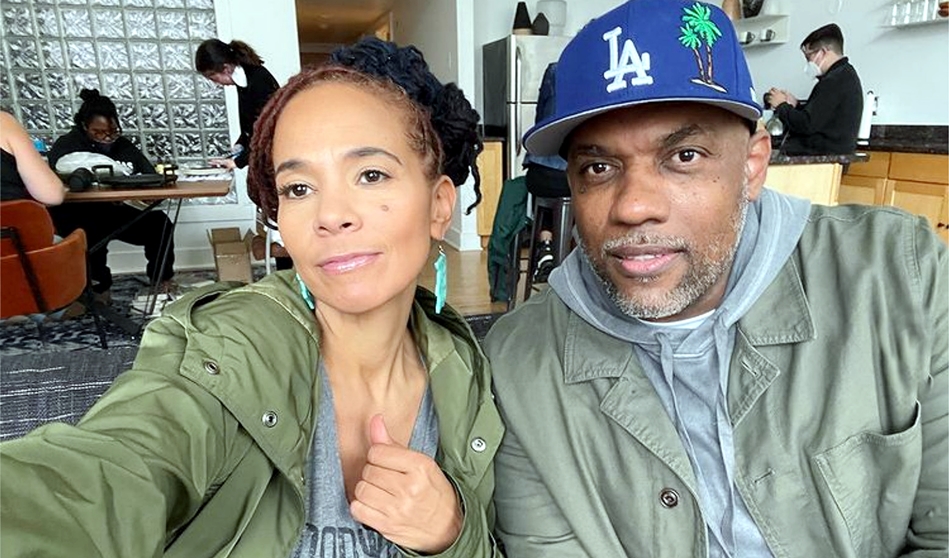 moore and Lasana Hotep, an executive producer from California. 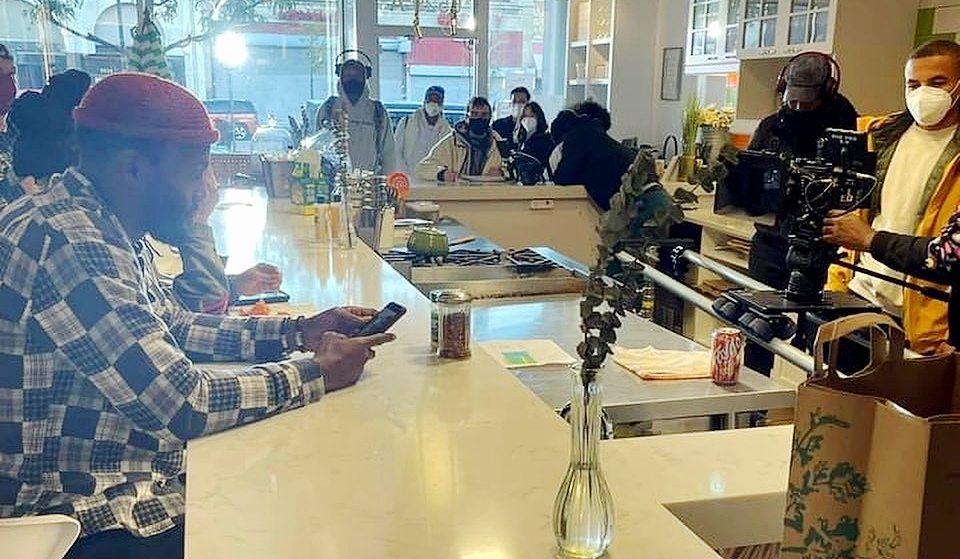 Truvillion (left) on location at The Kitchen by Cooking with Que, a vegan restaurant on Woodward Avenue in New Center. 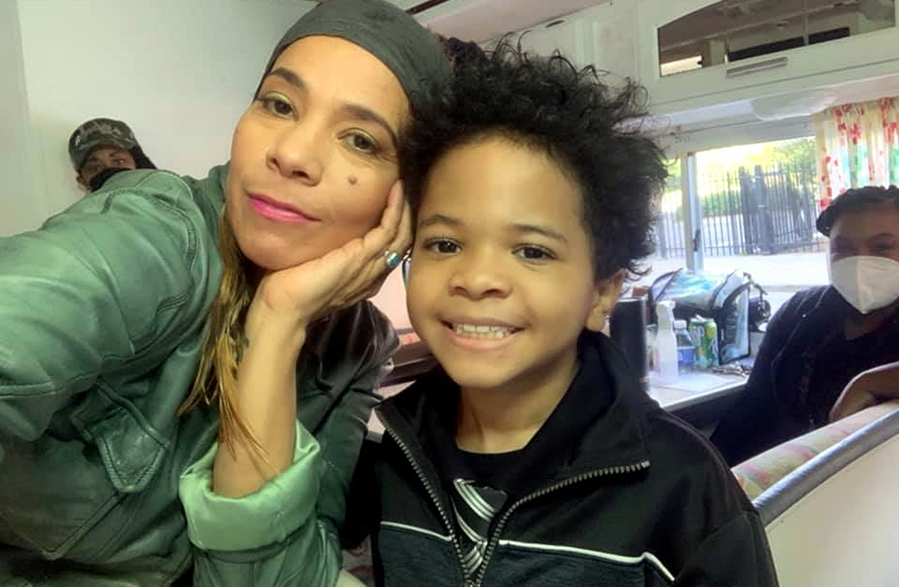 The screenwriter-actor-producer snaps a selfie with nephew Jaden Anthony Moore, who plays Idris, her 10-year-old son.

Another selfie moment as the stars relax between takes. 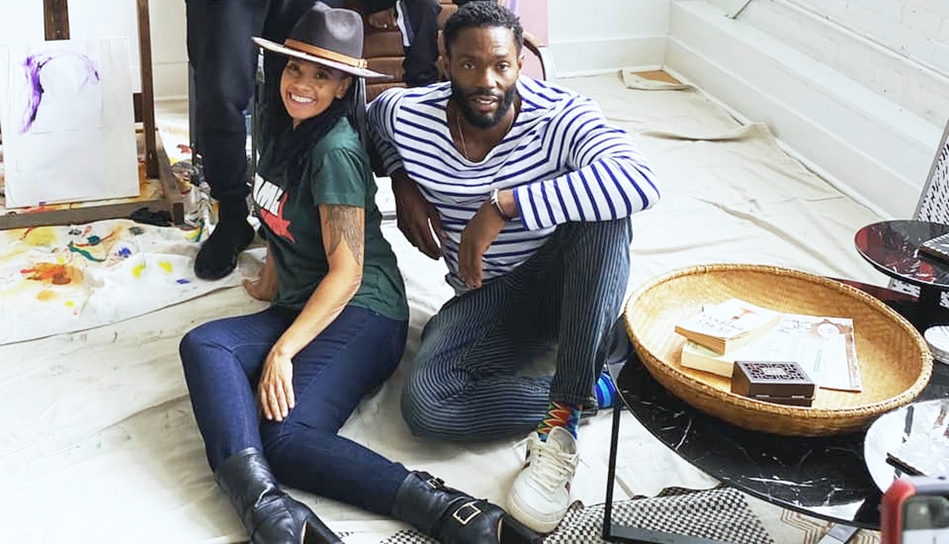 "Thank you, Tobias Truvillion, for lighting up our set and our city," moore posts.