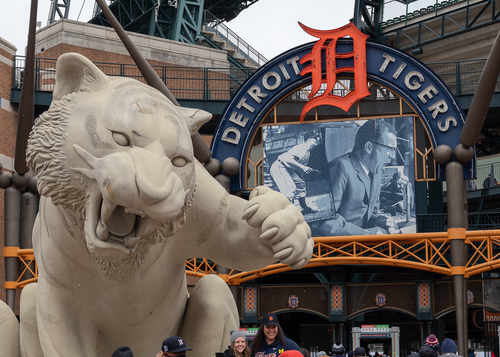 There's no need to be a playa hater this upcoming baseball season, as Comerica Park has two new draws:

The sandwich, called the Notorious P.I.G., also has onion straws and pickled jalapeños and is drizzled with BBQ sauce on an onion roll, Crain's reports.

It's one of a number of new snack offerings:

New concession items on deck for the season include pasties with flavors ranging from brisket and mac 'n cheese to apple, an Impossible burger, Milk 'N Cookies with Guernsey milk, (and a) beer-braised brat.

Lots of new branding is also coming to the stadium. Crain's reports something something about Chevy, Rocket Mortgage and Atwater Brewery.

Opening Day is next Friday, April 8, against the Chicago White Sox.