Michigan is among several swing states where the 2022 and 2024 elections could be torn by conflict beyond that on the ballot itself. 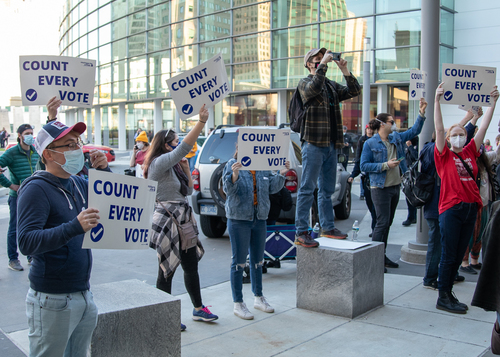 Demonstrators gathered outside the TCF Center in November 2020. (File photo)

The New York Times on Sunday published a look at how former President Trump's lies about the 2020 election has "gripped state legislatures," including ours.

At least 357 sitting Republican legislators in closely contested battleground states have used the power of their office to discredit or try to overturn the results of the 2020 presidential election, according to a review of legislative votes, records and official statements by The New York Times.

The tally accounts for 44 percent of the Republican legislators in the nine states where the presidential race was most narrowly decided. In each of those states, the election was conducted without any evidence of widespread fraud, leaving election officials from both parties in agreement on the victory of Joseph R. Biden Jr.

The Times’ analysis exposes how deeply rooted lies and misinformation about former President Donald J. Trump’s defeat have become in state legislatures, which play an integral role in U.S. democracy. In some, the false view that the election was stolen — either by fraud or as a result of pandemic-related changes to the process — is now widely accepted as fact among Republican lawmakers, turning statehouses into hotbeds of conspiratorial thinking and specious legal theories.

Michigan gets special focus. After Senate Majority Leader Mike Shirkey and then-House Speaker Lee Chatfield refused to recognize Trump's an "alternate slate" of electors (which included state GOP vice-chair Meshawn Maddock), Trump has "made transforming the Michigan Legislature a pet project," the Times reports. To that end, he has endorsed 10 candidates for both chambers in 2022 races, as well as two contenders for executive-level seats -- Matt DePerno for attorney general, and Kristina Karamo for secretary of state.

One of those endorsed had this to say:

Jonathan Lindsey, a Trump-endorsed candidate for the Michigan State Senate, said that at a minimum he thinks the State Legislature should vote on electors if an election is disputed. Regarding the 2020 election, he added: “If I were in that seat, I would have voted to send Trump electors.”

It shouldn't have to be noted, but Joe Biden beat Trump by more than 150,000 votes in Michigan. Subsequent audits show the race was correctly decided. And a Republican-controlled Senate Oversight Committee investigation showed the same.

Meanwhile, Bridge Michigan reports, grassroots-level reform that could actually make elections run more smoothly, and have results reported sooner, has stalled in a Lansing legislative environment divided between a Democratic executive branch and a GOP-dominated legislature.

(Secretary of State Jocelyn) Benson largely pushed recommendations that dovetail with recent requests from local clerks — particularly allowing pre-processing of ballots, which she said would help election workers get unofficial results out the night of and avoid proliferation of conspiracy theories.

... Legislative Republicans, meanwhile, have passed several bills to change election law this year, but most have been vetoed by Democratic Gov. Gretchen Whitmer. Some of those ideas, including requiring voter ID at the polls, are now part of a separate petition drive backed by the Michigan GOP.

Other changes that were vetoed by the governor had at least some bipartisan support, including bills to provide more training to poll challengers, expand polling place locations and require voters to attest they understand it’s illegal to vote more than once in an election.